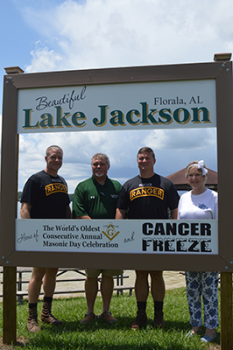 The sign might have said “no swimming today,” but the water was too much temptation in the heat as Carson, Corbon and Carter Perez waited to watch their dad jump. 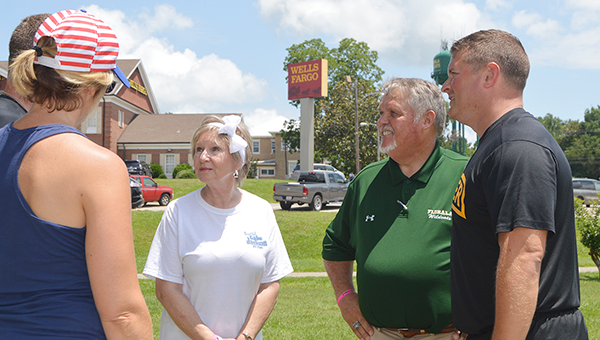 Rangers parachute into Lake Jackson in June of 2018. 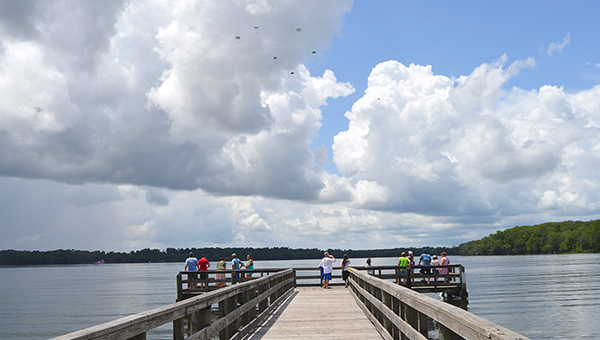 Army Rangers look like specks in the sky as they parachute from 1,500 feet up into Lake Jackson on Thursday.

Rangers were shuttled to the shore by boat, and buses were used to get them back to the airport. 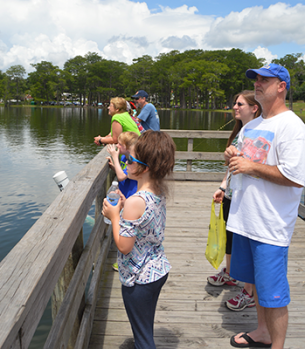 Joey Duncan of Laurel Hill brought his young children to watch the activities. 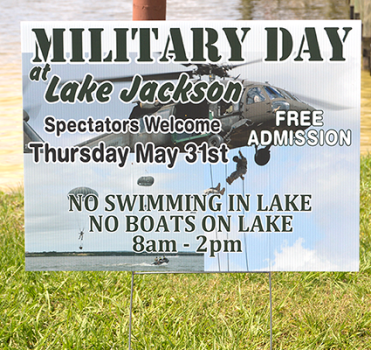 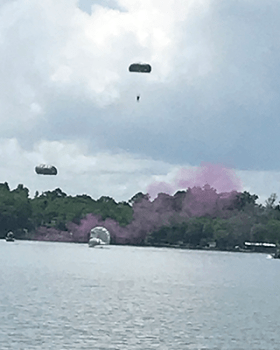 Florala’s Lake Jackson was officially closed most of the day Thursday, but one couldn’t tell it by the crowds gathered on the shores.

Army Rangers look like specks in the sky as they parachute from 1,500 feet up into Lake Jackson on Thursday.

And that was one of the best things about the day for members of the U.S. Army’s 6th Ranger Training Battalion from Eglin.

“When we came around in the helicopters, I couldn’t believe how the community turned out,” CSM Eric Buonopane said. “It made our guys feel really good.”

The Florala City Council agreed to close the lake for the Rangers’ training exercises.

CSM Buonopane explained that those training at Eglin are in the final phase of Army Ranger School. At Eglin, Rangers complete the “swamp phase” of their training, which is designed to give soldiers the skills needed to operate in a rainforest or swamp. They also learn how to deal with reptiles and how to determine the difference between venomous and non-venomous snakes, according to Army Ranger Training Brigade documents available online.

“This was just a proficiency jump,” Buonopane explained. “All of these guys are already qualified. Normally, we jump on land, so this is an opportunity to get experience in a deliberate water jump.

The activities were delayed slightly as the Rangers waited for clearance from Air Traffic Control in Ft. Rucker. The Rangers staged helicopters from Florala’s Municipal Airport, and soldiers parachuted from 1,500 feet up. Later in the day, they were scheduled to do much lower jumps without parachutes.

Despite the delays, and the heat, the crowd gathered to watch – which included family members who were bused up from Eglin – enjoyed what they saw.

Joey Duncan of Laurel Hill brought his young children to watch the activities.

Duncan said he served as a combat medic in the Army Reserve from 1989 until 1996.

“I brought the kids swimming here yesterday and saw the signs,” he said. “I knew we had to come back today so they could see this.”

Florala Mayor Terry Holley said it was a great day for the community.

“The Army had a local restaurant cater 195 lunches,” he said. “So it has been good for business.”