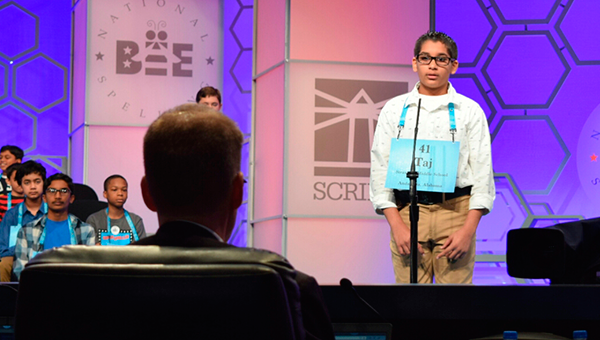 Neil Patel took this photograph of his son, Taj, competing in the Scripps National Spelling Bee this week. Patel said he got to the venue so early , he was able to be seated right behind the judges, as exhibited here.

Taj Patel plans to be back in Washington, D.C., this time next year.

Patel, who’s been a champion speller for years, spelled correctly through three rounds of the Scripps National Spelling Bee, but was among the several hundred students who did not advance to the finals based on scores from a preliminary written test.

“The whole experience was very exciting,” Patel said. “It was one of those once in a lifetime experiences that you will never forget.”

Between Patel’s spelling times, he had breaks during the day in which he could sightsee all over Washington, D.C.

“We went to the Capitol yesterday [Thursday] and to the Smithsonian Museum,” Patel said. “We also went to visit the Lincoln Memorial, the Washington Monument and all that jazz.”

Patel said that being on the stage spelling was a little nerve wracking, but he just wanted to know what his word was going to be.

“I was a little nervous, but I was more worried about if I was going to know the word or not,” Patel said. “Most of the kids that made it to the finals have been coming to the National Bee for three or four years, so I think now I will have the experience I need to make it to the finals next year.”

Patel said that he doesn’t know exactly what to study for next year, but he will start with root words and studying the dictionary.

“Now that I have a little experience I know what to study,” Patel said. “So I think that will help me get farther next year.”

Patel’s father, Neil Patel, has been helping the young brainiac with spelling bees since his son was in kindergarten.

“Everyone wants to see their kid on stage,” Neil said. “It is really a surreal moment, especially to see how much of a fan base he has already.”

Neil Patel said that the Covington County community has been supportive of Taj the entire way.

“I think they want next year to happen already,” Neil said. “Honestly, it gives Taj more energy to work hard and get back to the same stage.”

Patel’s journey has not been easy. Neil Patel said that his son usually studies three to four hours a day.

The preliminaries of the National Spelling Bee consisted of the preliminary test, which included spelling and vocabulary, and two rounds of onstage oral spelling. The score needed to advance to the finals was a 28.

“He [Patel] is a little down, but he is definitely more motivated for next year now,” Neil Patel said. “This is his very first time getting to the national level so he knows that he can do it now, and now he has the experience that he needed.”

More than 300 students had not yet misspelled a word but the Spelling Bee cuts the field of finalists to no more than 50 after the third round.

There were 519 spellers in rounds one and two, 452 participating in round three and only 41 spellers advancing to the finals.