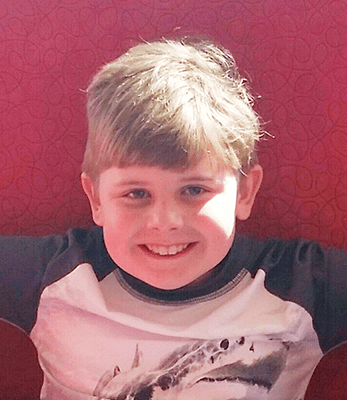 The 8-year-old Elba boy who died while vacationing with family in the Dominican Republic last week was the grandson of Kenneth and Kim Northey of Opp.

People who knew Travis Jackson “TJ” Northey said he was a child who could light up a room.

“He had a big smile. He loved to do things, and had a big imagination,” his grandfather said. “He was real smart. He was one of the top readers in his class, and was just out of the second grade. He had an imagination like you would not believe.”

TJ was the son of Leigh and Mark Wicker of Elba and Travis and Hayley Northey of Headland. Even though his parents had separated and each had remarried, Northey said TJ was happy with all of his families.

“Everybody loved him,” he said. “The new families welcomed him in.”

TJ was with his mom and step-dad at the Nickelodeon Hotels and Resort when he drowned in a freak accident made more bizarre, his grandfather said, because the little boy could swim like a fish.

“We had pool, the Wickers had a pool, he went to water parks, he would ride on a tube behind a boat and you weren’t worried about him on the water,” Northey said. “That’s another thing that made this hard to take.”

“He and I had a morning ritual,” she recalled. “He would come in to eat breakfast. He would talk and visit with everyone around him. It didn’t matter if the kids were in 6th grade or kindergarten. He made everyone feel welcome to join in the fun.”

Later in the day, she said, when he would return to her class for PE, he could give her an update on his day.

“He would run up to me first thing and tell me what had happened in class between breakfast and PE,” she said. “TJ was such a special boy. He made you smile bigger, laugh harder, dance a little more and he made it OK to be silly. My heart is broken.”

Northey said the outpouring of love and support from family, friends, and even strangers has helped ease the family’s pain. Because TJ died in the Dominican Republic, the family had to work with the U.S. Embassy to get him returned to the United States. Northey said he appreciates the help the family received from U.S. Sen. Richard Shelby and from Rep. Martha Roby.

“Nobody could tell us anything,” he said. “We did not know what was going on. They had to do an autopsy and review the findings before they would consider letting him go.”

His body was returned to the United States this Wednesday, a week after he died.

“There is no preparing for this kind of loss,” Northey said. “There is nothing you can do. My son and the little boy’s mom, are just devastated. Their hearts are ripped out.”

Northey said earlier in the week, the family learned that Steve Hardwick, who founded the Angel of Hope statue in Dothan’s Westgate Park, was placing flowers at the monument in memory of all children lost in memory of TJ.

“My son wanted me to meet him over there, so I did,” Northey said. “We sat there a little while, and Travis said, ‘Daddy, I think I feel a little better.’ I told him I did, too.”

Northey said TJ’s death has drawn reactions from people in all walks of life, “normal people like us, and lots of others.”

Nick and Terry Saban sent a basket of roses; Jimmy Raines of Yellowwood was at the visitation. Former Troy coach Larry Blakeney has reached out.

“All kinds of people have taken time to do things for us,” Northey said. After the visitation Friday night, he said, he told all of TJ’s parents how proud they should be.

“As sad as this situation is, to see the outpouring of people come to them is very special,” Northey said. “It means so much to have this. My thanks is to everybody that’s reached out to us.”