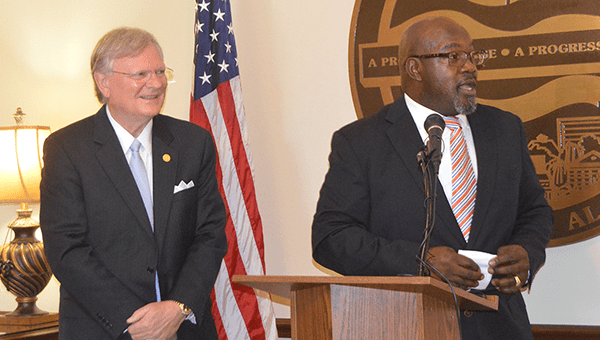 Tommie Agee has been named the Director of Leisure Services and special assistant to the mayor for the City of Andalusia.

Agee, who was a four-year starter at Auburn in the 1980s, and was a member of two Super Bowl championship teams during his pro career, will begin work here in July. He is the first person named to the post since longtime Leisure Services Director Dwight Mikel retired.

Agee currently works as the assistant director of Opelika’s Parks and Recreation Department.

“We have been looking for a leader in this department, and we hit a grand slam,” Johnson said in making the announcement.

Agee said, “I have loved, loved, loved working with kids, mainly because I’m a big kid myself.”

He said he would not make any plans for changes until he has an opportunity to get to know the staff and the local operations.

Johnson said he already talked with Agee about setting a priority of adding an aquatic center to the city’s facilities.

“Troy, Opelika and Dothan each have one,” the mayor said. “We have set a goal to get that done. Tommy was working in Opelika when theirs was built and he already knows what we need and don’t need.”

Johnson said among Agee’s other duties will be helping to make connections beneficial to the city based on his many contacts throughout the nation.

Agee lettered in football, basketball, baseball and track at Maplesville High School. He signed a scholarship to play football for head coach Pat Dye at Auburn in 1982, and started at Auburn from 1983-86. He was the lead blocking back for Bo Jackson and Brent Fullwood, ending his college career with 356 carries for 1,735 yards, 10 touchdowns, 34 receptions for 336 yards, and 10 kickoff returns for 215 yards.

His NFL career began at the Seattle Seahakws. He later played with the Kansas City Chiefs, and was a member of the Dallas Cowboys from 1990-1994. That team won Super Bowl XXVII and Super Bowl XXVIII, both times against Jim Kelly and the Buffalo Bills.

He and his wife, Anchylus, have three children, Tyler, Torey and Angelique, and one grandchild. The Andalusia Board of Education on Monday night hired Mrs. Agee to teach elementary school.