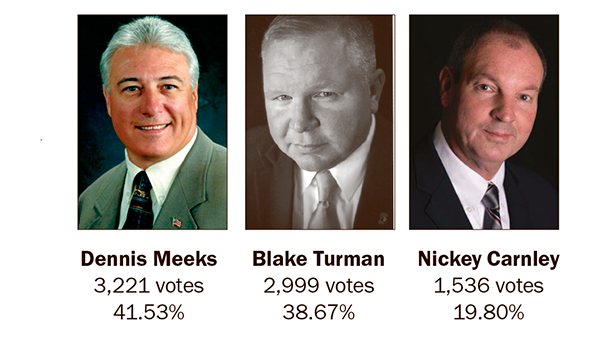 “We appreciate everybody who came out and supported us,” Meeks said. “In six weeks, we’ll need them again. We would ask all of Nickey’s voters and supporters to vote with us the second time around.”

Meeks, who is in his third term, said he’ll keep knocking on doors.

Turman, who received an endorsement from Carnley during a radio interview on WAAO Tuesday night, said the two men had a gentleman’s agreement that they would support each other if either was in a runoff.

“We met at the beginning of the campaign,” Turman said. “We both felt led to run, but we agreed if we got into a runoff, we would support each other. Nickey is a man of his word.”

Turman, who works with the Alabama State Troopers, said he was not surprised by the results because he didn’t know what to expect.

“We just know God’s will would be done,” he said.

Carnley is the former chief of the Opp Police Department and currently works as an investigator for the district attorney’s office.