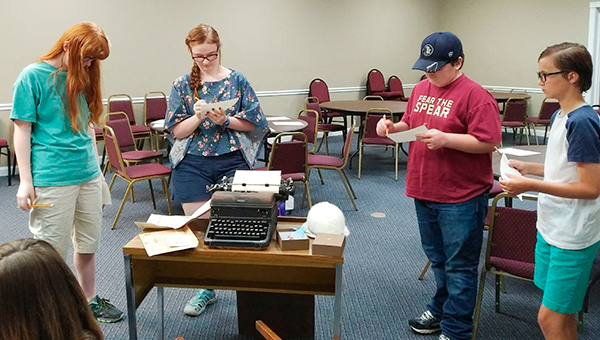 Students in the Teen Summer Program look for clues to help them write six-word short stories.

Teen program kicks off at APL

The Teen Summer Program at the Andalusia Public Library kicked off yesterday with a mystery writing workshop with Kristi White, and Children’s Director Emily Brooks said that attendance doubled since last year.

“We want to do more of things like this so seeing such great participation is great,” Brooks said. “The kids were speaking and were very interested.”

“It was just one of those teaching ideas that you get,” White said. “I was just trying to make writing fun, because writing can be fun.”

White wanted the kids to investigate the scene like they were in a crime scene investigation.

“I used an antique typewriter and left clues all around it,” White said. “Then they had to use the clues to get to the process of what they think happened and write a six word short story about it.”

White said that she was very pleased with the results of the stories of the students, who ranged from 11 to 19 years old.

“These kids are very bright,” White said. “The stories were funny and intriguing.”

Haley Warmack, one of the students, said that it was interesting way to write a story.

“It was really cool to learn that you can say so much with so little,” Warmack said.

Rebekah Bass said that it was fun finding the clues.

“Finding the clues was the best part for me,” Bass said. “It was really fun.”

White said that reading and writing at an early age is crucial.

“It is so important for students to learn these skills,” White said. “I always tell my students at the college that they need to always be reading. It doesn’t matter what they read, as long as they are interested it will help them learn.”

Author Ernest Hemingway created the six-word story, combining poetry and drama into a short form, and it is still growing in popularity.

One of his more famous six-word short stories is “For sale: Baby shoes. Never worn.”

The next teen workshop will be a music video workshop with Christine Lynn on June 12 and June 19 at 2:30 p.m.

Later this month, several faculty members from LBW Community College will teach a workshop on financial success, teaching how to write scholarship essays, and how to fill out financial aid forms for college.

The St. Peter Missionary Baptist Church will have a Gospel Benefit Program for John Gurley to help him with financial... read more