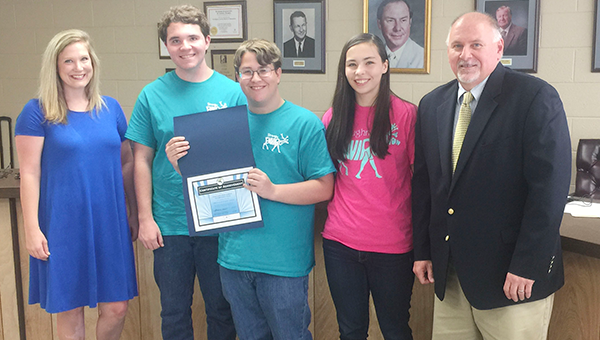 The Covington County Board of Education Tuesday night recognized Straughn High School’s Envirothon Team for its third place finish at the Alabama State Envirothon Competition held at the 4-H Center in Columbiana.

Sponsor Hollie Carter said that the students studied material for the competition for months.

“They worked really hard,” Carter said. “They weren’t allowed to have internet or any other outside resources, just the stuff that was provided.”

After placing third for the past two years, Carter said that the kids are ready to move up to the number one spot.

“It feels good to place that high, of course, but we are ready to get that championship spot,” Carter said. “I think some things that we can do to help us get there are studying more of the water topic, getting with Alabama Water Watchers so they can teach the material more and getting with more professionals around the community to help us.”

While attending the competition, students are trained by professionals on soils/land use, aquatic ecology, forestry, wildlife and a current environmental issue.

The teams use their prior knowledge and problem-solving skills to complete a series of five tests and prepare a 20-minute presentation regarding an environmental problem.

Since the team made the top three, they had to make another 20-minute presentation in front of all the schools in attendance and 10 judges, Carter said.

“They did a really good job in front of the judges,” Carter said. “I was nervous for them, but they kept it together.”

With only one senior leaving the team this year, Carter said that she is expecting another successful year.

“There were two new kids this year and they did really well, and since we will have a senior leaving that opens one spot on the team,” Carter said. “We may start a little earlier studying as well. We usually start in January, but if they want to get to that number one spot then we need to buckle down and start earlier.”

Other than the competition itself, the students were able to enjoy outside activities.

“A lot of them had the chance to go canoeing and other stuff outside,” Carter said. “They really enjoyed the competition as a whole.”

Carter said that the team would not have been as successful without the help of Dale Pancake, Chris Mead and Suzi Mersman.

“They have been really helpful in educating the kids and I am so thankful for them,” Carter said.

Bob Jones High School won the competition for the fifth time in a row, and Thornsby High School placed second.

The Covington County Board of Education named Troy Daniel Walden as the band director at Straughn High School, and Victoria... read more