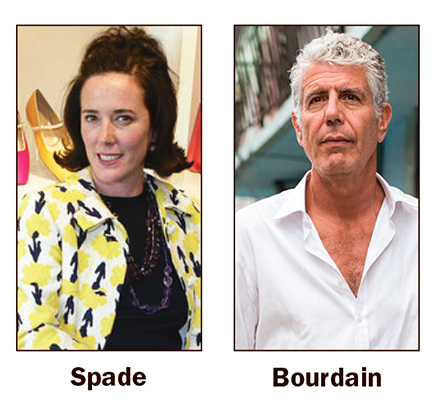 The shocking suicides of fashion designer Kate Spade and celebrity chef and television host Anthony Bourdain this week have raised the awareness of the increase in suicide deaths.

Suicide rates have been rising in nearly every state, according to the latest Vital Signs report by the Centers for Disease Control and Prevention (CDC) released Thursday.

But there is help available.

“If you have a loved one in distress, call 911 immediately, or take them to the emergency room,” Wilson said. “They will call for a mental health evaluation, determine the level of care needed, and place in-patient if needed.”

During business hours on weekdays, Wilson said, someone who is suicidal can go to any of South Central Alabama Mental Health’s outpatient offices and been seen as a crisis case.

And high-profile suicides seem to cause more suicides, she said. All threats should be taken seriously.

“Research shows that 8 out of 10 people who do consider suicide give warning signs,” she said. “Not everybody sees them. When everybody works together as a team for people dealing with depression or some type of emotional disorder. You are more aware of those cues.

“People who talk about or threaten suicide are 30 times more likely to kill themselves,” she said. “We are trained to take each threat seriously.”

Clients who seek help may need anti-depressants, group therapy, private counseling, or some combination of all three, she said.

Clients can access mental health services on Thursdays at the Andalusia branch of South Central Alabama Mental Health, much like a walk-in health clinic, Wilson said.

Have you adopted a patriotic fire hydrant yet? It’s not too late to help make Andalusia the most patriotic town... read more