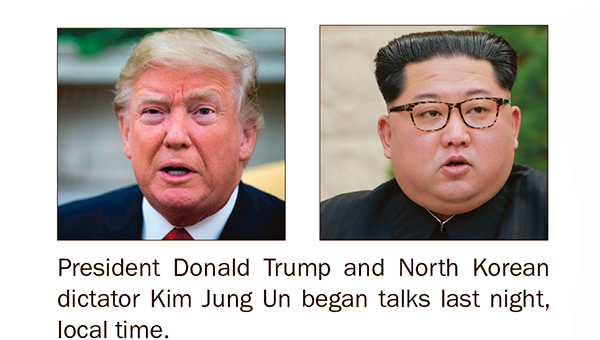 As negotiations between President Donald Trump and North Korean dictator Kim Jung Un were beginning Monday night at the U.S.-North Korean Summit, local expert Bill Blocker had high hopes for what could be a huge step toward positive relations with North Korea.

“I think this summit is absolutely critical to defuse tensions in a very dangerous area,” Blocker said. “They have a very unstable leader and they have a history of acting like they want to do something to change, but then don’t.”

Blocker was stationed in South Korea from 2000 to 2003 with the Air Force and went with a group that accompanied Madeleine Albright, then secretary of state for President Bill Clinton, to North Korea for 10 days as she tried to broker a deal with Kim Jung Il, the father of Un.

“I’ve been very interested in this meeting,” Blocker said. “When I was there, I saw the depression of the people over there. I saw where there were no trees at all because the people were tearing them down to eat the bark off of them because they were so hungry. I mean they had to turn off the electricity at night in most areas to save electricity.”

Blocker said that he hopes that something constructive will happen at this meeting, but he doesn’t see Un giving in.

“This is all about power based on keeping their nuclear weapons,” Blocker said. “And this meeting has to be about complete denuclearization, because we have nothing else to talk about if we don’t talk about this. North Korea has the most repressive policies against religion and freedom of speech, the same things we take advantage of here, how can we have any dialogue with a leader that blows his own people apart.”

“I applaud Trump for making this happen,” Blocker said. “And I think it is great that Un released the three Korean-American prisoners, but it is not near enough for us to sit down and freely let them keep testing their nuclear weapons.”

Blocker said that for him, the ideal outcome of the summit would be that North Korea agreeing to give up all of their nuclear weapons in exchange for economic development.

“My ideal result of the summit would be for Kim Jong Un to say ‘You know what you’re right, we need some help,’ ” Blocker said. “But with that being said, there needs to be a monetary limit and time limit. The western countries would be able to help them financially, but it needs to be manageable and shared. It also needs to be in concrete and verifiable.”

“Peace, where we have a win-win solution; military force where we devastate the North Korean regime and stop their program by force; or to capitulate like we’ve done in the past,” Graham said.