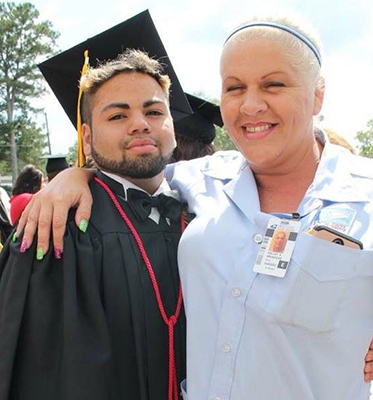 Malcolm “Dee” Brundidge and his family are still in limbo about his treatment for a rare health condition as they wait for pathology results.

“The doctors have told us that his condition is so rare that they will have to provide a special plan for him,” Holley Brundidge, Dee’s mother, said. “They say that there have only seen two other cases of the same cancer that Dee has.”

Dee has been fighting brain cancer ever since he was 18 months old. Doctors performed emergency surgery to remove a new brain tumor a month ago, and his family has learned the cancer has spread to his kidneys and lungs.

“They found a golf ball size tumor on his kidney,” Brundidge said. “And once they removed that they found that both of his kidneys were full of one centimeter tumors.”

After a PET scan on Friday, the doctors were able to rule out that the cancer had metastasized from his bones and bone marrow. But the scan also showed two spots of cancer on his right lung, and Brundidge is waiting nervously for the results of the pathology report.

Brundidge said that each type of cancer would require a different type of treatment.

“Both treatments are so different,” Brundidge said. “All I know now is that he is in the most pain he has ever been in.”

“God’s got me” is what Dee has said to his mother constantly during his situation.

“He has such high spirits,” Brundidge said. “I cry at night because I don’t want him to see me crying, but I tell him I’m not crying because of the cancer, I’m crying because I am a mother, and as a mother I hate seeing my baby go through this.”

Brundidge said that the community has been so supportive through their entire journey.

Brundidge’s family has been working hard trying to raise money for Dee.

They have sold T-shirts, organized a pool party, set up a donation account at Wells Fargo, making car decals and are trying to sell bracelets to fundraise money for Dee.

“We just finished the first order of T-shirts, but if anyone would like to get more ordered they can go to Joker Grafix to order more,” Brundidge said. “They are grey on grey and will be around $15.”

The pool party for Dee will be Sat., June 30, from 6 p.m. to 9 p.m. at Opp City Pool. Admission will be $5, all proceeds will go to help with Dee’s journey, and food and drinks will be provided.

“We appreciate everything that everyone is doing,” Brundidge said. “God knows who everyone is that is helping and prayers are the main thing that we need.”

For anyone wanting to donate to Dee’s Journey, the account at Wells Fargo is under Dee Brundidge Donation.

There is also a GoFundMe account set up for people to donate. For more information go to: https://www.gofundme.com/the-brundidge-family-dee.