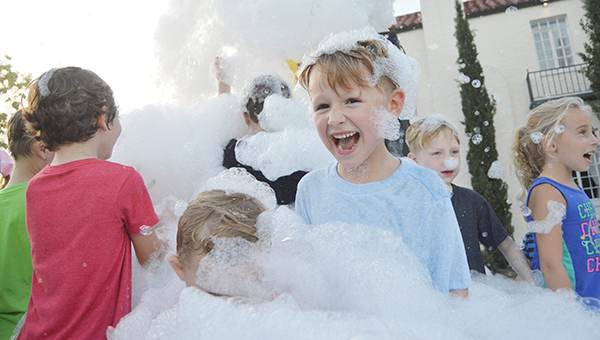 The Foam Frenzy is one of the biggest attractions at July Jamz. Josh Dutton/Star-News

“We’ve got upgraded sound equipment, which doesn’t mean the music will be louder, it just means a clearer, crisper, nicer sound,” Chamber Executive Director Chrissie Duffy said. The power system also has been upgraded from the temporary power pole used in the past to a permanent power system.

The venue also is offering seating for those with mobility issues, or those who get overheated.

“We have a shady patio tent with misters installed all around it, so people will have a nice, cool place to go,” Duffy said. “It’s accessible from the top parking lot, which makes it easy for people with mobility issues.”

This year’s line-up features some new performers and includes multiple genres, but the event is not just about the music.

“Just coming out and watching children play, and seeing families together on the lawn is an excellent experience,” Duffy said. “It has an old- school, neighborhood feel. It’s about watching kids play, listening to live music, and coming together as a community and making beautiful memories.”

To help make those memories, the Chamber will again have a foam frenzy for kids, which will begin about 7 each Thursday. This year, they’ve also added a Ring Roamer photo booth.

“It’s very cool,’ Duffy said. “It’s a portable photo booth, like you see at Sloss Fest and other cool concerts. They send a staff person who goes all through the crowd. It’s a photo booth that moves around.”

The booth can send a photo immediately to a subject’s phone, or you may go to a station to get a photo printed.

In addition to what Duffy describes as an “awesome line-up,” the event offers vendors offering everything from Kona ice to ice cream to sausage dogs, pizza, and homemade brownies and cookies.

“We like to say that this event has no barrier to entry,” Duffy said. “You are welcome to bring your cooler and supper. But if you don’t want to fool with that, we have a nice variety of vendors.”

This Thursday’s concert features former Voice contestant Charity Bowden opening for Willie Sugarcapps. The band is a collaborative group of individual performers who hail from South Alabama. One of the band members described the sound as “Crosby Steels and Nash meets Hank Williams.”