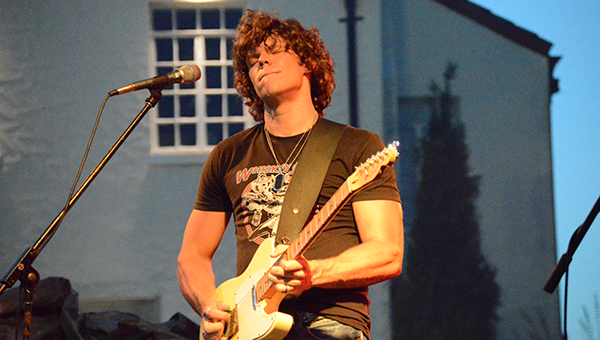 Opp native and Nashville artist Martin McDaniel - one of the most popular performers in the July Jamz concert series - will perform at Candyland on Saturday.

Opp native Martin McDaniel said response to his debut single “About Last Night,” released in December, has been great and that big things are coming soon.

“We are getting ready to drop an EP and work on videos for every one of those songs,” McDaniel said. “We are just waiting on the cover art and a few things to come together and then we can hopefully put it up for pre-sale soon.”

McDaniel’s EP “Just the Beginning” will include six songs that tell a story.

“From the beginning of writing this, I didn’t plan on it coming together as a story,” McDaniel said. “It sort of just happened like that.”

McDaniel’s video for “About Last Night” was released June 15, and he was excited about the outcome.

“My buddy director Steve [Condon] directed the video,” McDaniel said. “He has directed several videos for Old Dominion so I knew he was the guy I wanted to direct it.”

McDaniel’s inspiration for writing “About Last Night” came from a night out on the town with some of his friends.

“We had gone out to see some people play the night before and when we woke up the next day we just started talking about last night,” McDaniel said. “Everyone has had one of those experiences about last night, so we started writing and went with that idea.”

McDaniel said that his inspiration for writing depends on several different variables.

“It can be based on an experience or the band can come in and have no clue what we are going to write,” McDaniel said. “If that happens then we will just start talking and usually something comes from a conversation we have. It really just depends on who I am writing with.”

McDaniel’s touring schedule for July includes four performances in Nashville, One in Tuscaloosa and two in San Diego. But this week, he is home in Andalusia and Opp. McDaniel will perform this Thursday at July Jamz and is beyond excited to catch up with old friends and family.

“Playing at July Jamz, Rattlesnake Rodeo or Charley’s Place is always a great time for me,” McDaniel said. “Seeing all my hometown people and getting to come back is always a good time.”

Since McDaniel has been living in Nashville since 2008, he sees himself still playing big festivals and taking the next step in the next five years.

“I still see us playing all the big festivals, maybe a couple songs on the radio,” McDaniel said. “I’m ready to take the next step and keep on pushing forward.”

After July Jamz, McDaniel has a busy schedule going to California for a week, going to a writers’ retreat in Florida, playing at the Bluebird Café in Nashville and playing a couple shows in Chicago.

Martin has played all around the country, opening for huge acts like Luke Bryan, Blake Shelton, Billy Currington and other country music heavy hitters.

“About Last Night” is available on all listening platforms and the video can be watched on YouTube.

Connor Sowards and the Final Hours will open for McDaniel.

This week’s sponsor is Zaxby’s.