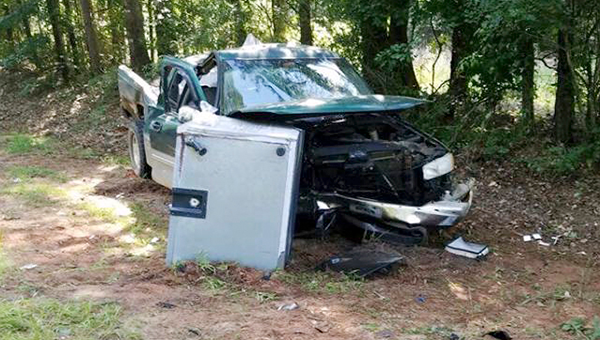 Billy Joe Marler of Brantley was driving this truck. He was airlifted from near the scene.

Alabama State Troopers have identified the 25-year-old woman who died in a Sunday morning wreck as Jacqueline Haley Elisha Henderson.

Henderson died when her 2001 Oldsmobile Aurora was struck by a 1999 GMC truck driven by Billy Joe Marler of Brantley. The crash occurred on County Road 43 in Heath at 7:45 a.m.

According to her obituary from Keahey Funeral Home, Henderson worked as a sitter in people’s home. She was a member of Zion Hill Baptist Church and the mother of a 6-year-old daughter, Madilyn Stoudemire of Andalusia.

Funeral services will be at 11 a.m. Thursday, July 19, 2018 at Zion Hill Baptist Church. The family will receive friends from 6 to 8 p.m., Wednesday at Keahey Funeral Home.

Rescue personnel described the crash as a head-on collision.

Marler was airlifted from near the scene and transported to Walton Medical Center.