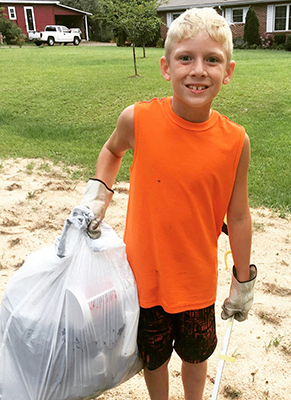 Bradt Jones picks up trash on the side of the road to help his community look better. Courtesy photo

After seeing a video of students picking up trash on the side of the road, Brandt Jones decided to do something about his own community’s trash.

“I started a couple of weeks ago just walking around my neighborhood and picking up trash,” Jones said. “After I saw the video, I knew that I wanted to be apart of it.”

Jones, a student at Opp Middle School, said that while he was picking up trash, people have stopped his mother and asked if he was in trouble.

“After we finished one day, my mother and I went to the post office and she was stopped by a car,” Jones said. “They asked if I was in trouble and that my punishment was picking up trash. So my mom said, ‘No he wanted to do this.’”

Jones said that when he first told his mother about his idea, he had to drag her out of bed to take him around the neighborhood.

“She said that she didn’t want to get up,” Jones said. “So I kept on trying to drag her out bed, but whenever we finished that first trip, she said that she was proud of me.”

Jones’ mother said that she was proud of him regardless of the situation.

“I may not always feel like I am the best mama, and I know that I fail more than I succeed, but this child shows me every day that I must be doing something right,” Jeanna said. “When I told him today that I was proud of him for his hard work and for being so kind, he just shrugged and said, ‘Being kind is the right thing to do.’”

Jones’ aunt, Sherrie Phillips, said that she was shocked when she heard that he was doing this.

“He is really hyper and anything will entertain him,” Phillips said. “We have no clue where he came up with the idea, so I said go ahead and help yourself.”

Jones said that over the past couple of weeks he has picked up a lot of cans and several cigarette butts.

“I usually fill the bag all the way up,” Jones said. “Then I take it to my trashcan whenever we finish.”

Jones said that whenever he finishes with his neighborhood, he hopes to pick up trash all around Opp.

“The goal is to finish my neighborhood,” Jones said. “But after that, I hope to pick up all of Opp and then move on to Florala or maybe Andalusia.”

Helping give back to the community is the main thing that drives Jones, he said.

“I hope to keep on helping in the community as I get older,” Jones said. “But I really want to keep on doing this as well.”

If Jones isn’t picking up trash or at school, he enjoys playing basketball, video games, putting puzzles together and playing with StikBots. He is the son of Jeanna Spears and Jared and Tracy Jones.

Pressbox going up in stadium

Crews began this week erecting the red iron that will form the base of the pressbox at Andalusia  High School’s... read more