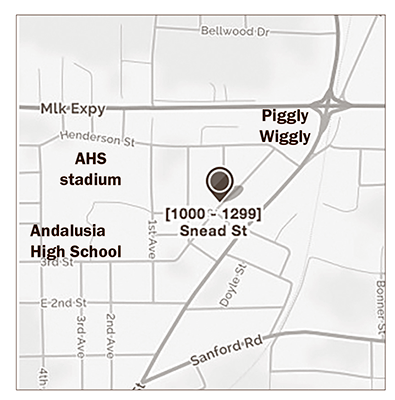 The APD is seeking help identifiying suspects in a drive-by shooting that occurred around noon on Monday on Snead Street, highlighted on this map. They did not disclose the exact location.

The Andalusia Police Dept. is seeking the public’s help in solving a drive-by shooting that happened just before 12 noon Monday on Snead Street.

When the APD released a statement about the incident in early Monday afternoon, investigators had no suspects, public information director Allen Scofield said. Two vehicles that left the area after the shooting incident are being sought, he said.

One is a black, four-door Chevrolet Silverado pickup with a chrome package and the second is a small red car of unknown make/model.

No injuries were involved.

Asked late Monday afternoon if the shooters shot into a dwelling or vehicle, Scofield said, “I don’t have that info right now.”

But a commenter on social media said a bullet went through her window.

Anyone with information concerning this incident, is asked to contact the Andalusia Police Dept. at 334-222-1155.

4 charged with murder free on bond

The four people charged with murder in the Friday death of Joshua J. Mount are free on bond. At about... read more