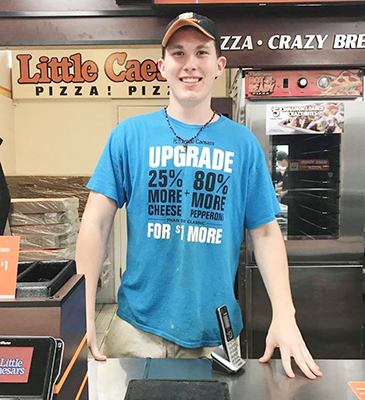 When The Star-News first shared Parker’s story in June, he was working two jobs to earn the money needed for a trip to New York City to arrange surgery to correct scoliosis that has plagued him for six years. A friend had just started a GoFundMe account to support him.

Parker recently made that trip, and has a January date for his surgery. Support for his GoFundMe account helped immensely for his trip to New York City in July.

Parker first learned he had scoliosis six years ago, and was encouraged to lose weight in hopes the condition would work itself out. For five years, Parker worked on losing weight. He played football, and ran track and cross-country, but his pain worsened.

After his recent trip to New York City, the battle’s end is near. Parker had an appointment with the only surgeon who corrects the condition, and accepts his insurance. Support for the GoFundMe account set up in June by Julie Davis Anderson was a great help, he said.

“I had a lot of positive feedback from the original GoFundMe,” Parker said. “I met with several children that had the same diagnosis as me and even had scars where they had the same surgery. We left in July with $1,600 from the GoFundMe. We used that mostly on the airplane ticket there, the hotel and the food.”

Parker said that the entire trip was a complete success and that the doctor set a date for his Adolescent Idiopathic Scoliosis surgery for January 29.

“The trip went great,” Parker said. “Dr. Lenke set a date for the surgery, but said that I have a very severe case of scoliosis.”

“It is a pretty serious surgery,” Parker said. “I will be in the hospital for about two weeks and then when I get home I will be down for three to four months.”

Parker said that he has not decided if he is going to do another GoFundMe account, but has talked with his boss, Skip Enzor, at Little Caesars and Tropical Smoothie, to see if they can host a charity event during the month of October.

“All I know is that I want to do something that will also benefit the community,” Parker said. “I am hoping to raise at least $5,000 to $6,000 this time, but honestly anything at all would help. I would also really like to get some business to donate or sponsor a charity for me because you can never have too much help.”

Parker said that other than being a little taller, he is looking forward to giving back to the community after he recovers from his surgery.

“I feel like I will be given a new chance,” Parker said. “And maybe I can do something good for the community with it. I love having the opportunity to be a great role model for children with Adolescent Idiopathic Scoliosis and show them that they can get the treatment they need as well.”

Parker will fly in to New York City on January 28 for his pre-surgery, thanks to Pilots for Christ, and is scheduled to have the surgery on January 29.

Bicentennial exhibit on display in September

Making Alabama: A Bicentennial Traveling Exhibit, presented by the Alabama Humanities Foundation, will be on display in Andalusia at the... read more