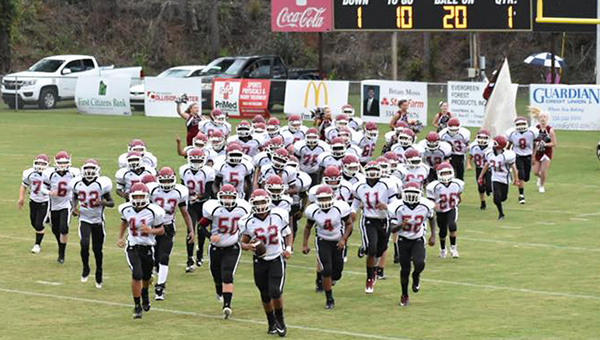 The AJHS Bulldogs take the field in Greenville last week. The Bulldogs won, 22-8. Until construction is completed at the stadium, the team may play at the Kiwanis Center. Courtesy photo

“This week was weather cancellation,” Superintendent Ted Watson said. “But the building commission will not let us practice or play anything in the stadium except Friday varsity.”

Construction continues at the stadium. Watson said late Wednesday that work on the pressbox has stopped for a few weeks, but that work continues on the new plaza, which is behind a fence, and at the auditorium.

The varsity team is practicing at Johnson Park, or at the indoor facility. And others are making contingency plans.

Andalusia Youth Football League President Nichole Appleyard said that they are marking preparations as to what the next move by the city will be.

“We know that our next game will be away,” Appleyard said. “So we are not concerned about this Saturday, but we are just waiting to see what the city will do.”

The youth league has already played two games this season and are getting ready for their first regular season game this Saturday in Luverne.

“We played a pre-season game in Florala and a jamboree game in Evergreen,” Appleyard said. “We have a good group of boys and one girl.”

AJHS head football coach John Dugger has an idea of where they will play, but is still waiting on the final word.

“We are talking about playing at the Kiwanis Center,” Dugger said. “But as of right now we don’t know, but we understand.”

Their next game will be out of town, but next week the Bulldogs will be home for two games.

“Hopefully we will have things figured out by next week,” Dugger said. “I just want our boys to have the opportunity to play in the new stadium.”

AJHS had their first game last week against Greenville and came out with a win, 22-6.

“We had a great first game in Greenville,” Dugger said. “We had a lot of seventh graders play which is always good, and we played very hard. I think we need to be more physical on the offensive line and need to recognize our keys on defense, but other than that I am very proud of the team.”

The junior high team practices on the baseball field.

The AHS Junior Varsity football team on the other hand has decided to take all of their games out of town.

“We will be on the road the whole time,” head coach Trent Taylor said. “Our first game was supposed to be at home, but the stadium wasn’t ready. I just want our kids to have the opportunity to play, so if we have to travel then so be it.”

Taylor said that the farthest away game for the team would be in Brewton.

“The rest of the games are pretty close, so I think we can manage,” Taylor said. “If the opposing coach doesn’t mind then we will take the trips up there.”

Taylor said that the team is improving with each week.

“We are improving from week to week,” Taylor said. “We played a good game against Hillcrest last week and we are improving every time we get on the ball.”

Stadium construction, except for the pressbox, is expected to be completed by homecoming, which is Oct. 12.

Editor’s note: this story was updated at 8:56 a.m. Thursday to clarify that varsity games will be played on Friday nights.