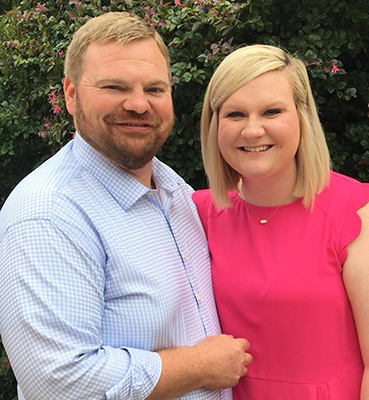 Sam and Emily (Pilotte) Fountain have been dreading this month for a long time. But instead of mourning, they’re asking friends and family members to do random acts of kindness to help them turn the loss of a daughter, and later a son, into a tribute to the babies and a payback for all the acts of kindness they’ve received in the past year.

“Our daughter, Charlotte, was born sleeping on September 26, 2017, at 37 weeks due to a placental abruption,” Mrs. Fountain, who is formerly of Andalusia, said. “When we went to the hospital we had no idea there was anything wrong.”

While Mrs. Fountain was being hooked up to monitors, she learned that her baby girl’s heart had stopped beating.

“Our faith most of all has helped us through the last year,” she said. “Without a doubt. Our family and friends have loved on us and supported us through every choice and every step we’ve taken. They have also reminded us constantly through words and actions that God is so very good. He is still in control. He will always be good even when our circumstances are so very dark.”

“The quote from the book, ‘You have been my friend. That in itself is a tremendous thing,’ was also something we used in Charlotte’s room and was also used in showers done for us. My best friend actually suggested the idea of random acts of kindness when I was discussing with her what my husband and I could do to honor our sweet girl. She suggested we do something that family, friends, and loved ones could also participate in. That’s when ‘Charlotte’s Web’ was born.

“We are asking on her first birthday, September 26, 2018, that people help us ‘weave of web of kindness’ by doing something kind for someone else,” Fountain said. “They can pay for someone else’s meal, hold a door open for someone, pray with someone, or just whatever comes to mind. Be a friend.

“We pray that this is a door to show others God’s incredible goodness,” she said. “We have had crazy kindness shown to us in a million different ways over the past year. We want to pass that on.”

On June 7, 2018 the couple lost another child, David, to a rare non-hereditary disorder at 20 weeks. The two losses had nothing to do with one another.

“While this event does bear Charlotte’s name and is happening on her birthday, this is to honor both of our sweet babies,” Mrs. Fountain said. “We’ve prayed that the Lord would use each of our children, as well as us, to bring honor and glory to His name. It’s because of Him we were blessed with any time at all with our babies. It’s because of Him we have the great privilege to even be parents. This event is about God. Not about us or the people participating. We want to leave a legacy for their sweet little lives.”

Mrs. Fountain shared her idea on Facebook after she purchased 100 cards to share with family and friends. The response was more than she could ever have imagined.

“I’ve ordered hundreds more of the cards because people just kept commenting, texting, or messaging asking to participate,” she said. “God really showed us that there are so many people who loved Charlotte, and us, and wanted to honor her even if they don’t know us. “

Mrs. Fountain said she knows that people don’t’ talk about pregnancy/infant loss because it is sad.

“We also pray that if people have lost a baby or babies then they make this day for them too,” she said.

While she designed the card to share, she said having a card is not necessary for doing an act of kindness.

“They are just a way of explaining why we are doing what we’re doing,” she said.

She asks that those who want to share what they’ve done use the hashtag #charlottesweb.

It’s the time of year to celebrate grandparents, and many Andalusia Elementary students did just that on Friday, inviting their... read more