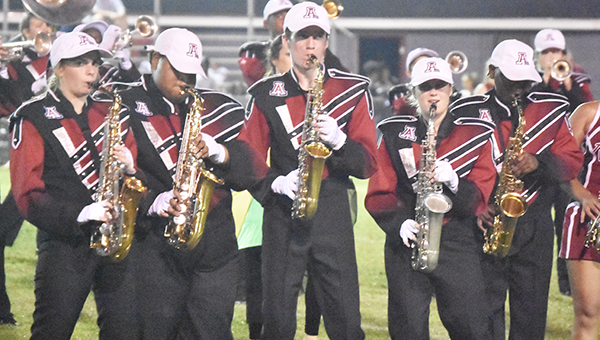 A Sound Tradition will perform in exhibition only.

A-Town Invitational, the annual band competition hosted by Andalusia High School, will be held in Opp this year.

“Due to safety concerns, hosting the event at Andalusia Municipal Stadium is not an option, and Opp City Schools’ Superintendent Michael Smithart graciously offered the stadium in Opp as an alternate site for this year’s event,” the press release stated.

While this change will present some logistical challenges, AHS Band Director and Assistant Principal Bennie Shellhouse, said he is glad the competition will still take place, as it is the band’s largest fundraiser of the year. He is also encouraged that Opp City Schools and Andalusia City Schools are working together to make this happen.

“It speaks volumes of our program that the administration in Opp is allowing us to go over and participate in their stadium,” Shellhouse said.

Now, AHS Band Boosters now need lots of volunteers are needed to make this year’s event a successful one. There are 21 bands registered for this year’s A-Town, and while the location may have changed, Andalusia High School and the City of Andalusia are still being represented. All band parents are needed to help make this work.

“Our goal is to see how we can make this as successful as possible this year, and then we will look forward to hosting in our home stadium next year when construction is complete,” Shellhouse said.

This is the 13th year for A-Town and the band has its largest group of students ever with 180 marching this year. This contest allows other bands to see the caliber of program Andalusia has, and that will not change, regardless of the location of the event, Shellhouse said.

The AHS band, A Sound Tradition, participates in the annual festival in exhibition only.