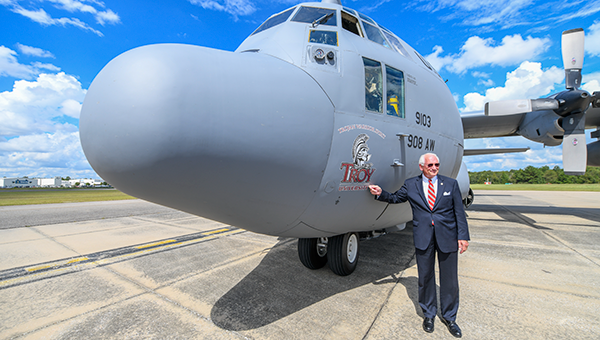 The United States Air Force Reserve showed off its “Trojan Warrior Spirit” Tuesday at the Troy Municipal Airport with the unveiling of a C-130 Hercules airplane with Troy University-related “nose art.”

The 908th Airlift Wing, stationed at Maxwell Air Force Base, has added University-related artwork to one of its aircraft, designating it “The Trojan Warrior Spirit.”

“This is one of the most famous and venerable aircraft in the storied history of the Air Force,” said retired Air Force Maj. Gen. Walter Givhan, Senior Vice Chancellor for Advancement and Economic Development and a former command pilot. “We are certainly honored to have this aircraft at Troy Municipal Airport on the ramp with the opportunity to dedicate it as the Trojan Warrior Spirit.”

The C-130 is the longest continuously produced military aircraft at more than 60 years, and is used for tactical airlifts among other missions. It has been used as a gunship, for airborne assault, search and rescue, weather reconnaissance, aerial refueling, maritime patrol and firefighting.

The C-130 also played a prominent role in the Vietnam War, and Troy University will highlight the service of Vietnam War veterans during its upcoming Military Appreciation Day game on Saturday.

“All my life, Troy University has had a special relationship with the Air Force, and this is representative of that,” Reeves said.

The Trojan Warrior Spirit C-130 will highlight pre-game festivities at The Vet on Saturday as it performs a flyover for Military Appreciation Day.

Man so upset by answer, deputy removes him from room Covington County Commissioners say they are making progress on the... read more