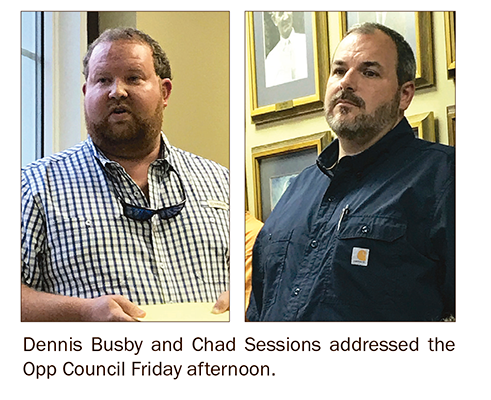 The owners of a trucking company looking to expand in Opp reviewed their plans with the city council and a standing-room-only crowd in a special workshop session Friday afternoon.

Earlier this week, Mayor Becky Bracke proposed an agreement in which the city would provide 16 acres for the company, which would in turn build a facility on the bypass and hire employ 70 people within five years. Councilman Chad Jackson’s motion to approve the agreement died for a lack of a second Monday.

But the council agreed to revisit the issue in the specially-called workshop meeting Friday.

Dennis Busby and Chad Sessions, owners of RCA Logistics LLC, which currently operates in Elba, said they want to locate in Opp, but have had several other cities offer property if the council passes on the project.

Busby explained that the company currently has about 20 trucks on the road, and has put a deposit on an additional 10 trucks and trailers to be added in 2019, a $1.9 million investment.

By bringing their current assets, building a facility, and adding the additional trucks, the total investment in the property in Opp would be $5.8 million, Busby said.

“If Opp agrees to give us the land, and does about $30,000 worth of dirt work, that would represent about 1.75 percent of the total investment,” he said.

Several people in the audience questioned why the company needed 16 acres.

Busby said the partners also own a truck brokerage firm that will be housed in the facility.

“And we want a full service diesel shop, not just for our stuff, for retail service,” Busby said. “There is a lack of that now. There is no 24/7 call service. In about two years, we will add a full-scale diesel shop.

Busby said the expansion is being financed locally, engineered locally, and the partners plan to buy buidling materials locally.

“What other projects have come to Opp wanting to invest $5.8 million, with financing to back it up,” he asked.

“Nobody is going to come to Opp, Ala., unless we give them something,” she said. “We are talking about giving land away. We’ve had it since 2002, and every mayor has tried to do something with it. You’ve heard a thing is only worth what somebody is willing to pay for it? So far, that’s zero.”

She pointed out that previous administrations had helped Sonoco, Global Manufacturing, MFG and American Apparel.

“We have to give incentives to get businesses here,” she said.

Bracke said the city also is working with the Department of Transportation to get funding for an access road to the property valued at $350,000.

Bracke also addressed complaints she said some have made about the potential for RCA Trucking to “hurt” existing trucking companies in Opp.

“We have two successful trucking businesses here, and nobody gave them anything,” she said. “That was then. In 2018, that’s not the way it is. That doesn’t go.

“For those of you who are saying, ‘We don’t want to hurt them, we want to support them,’ what you’re telling me is if we start talking to McDonalds , we better not get it in here because it would hurt Burger King. The more you have in a town, the more you have to offer.”

Former Mayor John Bartholomew, who attended the meeting, voiced his support for the project.

Despite generally positive feedback, council members declined to bring the matter to a vote in front of the packed house. It is expected to be on the agenda at Monday night’s regularly-scheduled council meeting.

The memorandum of understanding states that the city will deed the property to the company when construction is completed.