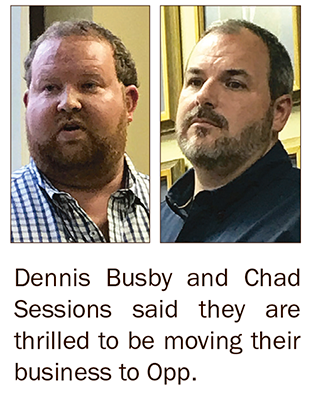 The owners of RCA Logistics LLC said they will never forget the support they’ve received from the City of Opp.

Owners Dennis Busby and Chad Sessions secured an agreement with the City of Opp Monday night in which the city agreed to provide 16 acres of land on the bypass on which the two will relocate and expand their business.

“To say that Chad and I feel excited, eager, and mostly humbled that so many Opp residents and its officials have put their faith in us to relocate RCA Trucking to the by-pass location would be an immense understatement,” Busby said after Monday night’s meeting. “The support has been overwhelming. Telephone calls, messages, and the positive social media presence have assured us that we made the right decision to have been so passionate about relocating to Opp.

“I can assure the City of Opp that RCA Trucking will never forget that support,” Busby said. “We are excited to create new jobs in Opp, provide revenue generating taxes, and give back to this community. We are eager to promote Opp’s further growth and any future economic development.”

Last week, Busby explained that the two business partners have received offers of better incentives from surrounding communities, but want their business – which they began in Elba – to be in Opp.

“We’re both from Kinston,” Busby explained. “We support everything in Opp. There’s not a rec league in Kinston. Three people in that (council) room are my former baseball coaches. My children play baseball and soccer here. Chad’s kids are (in Opp schools.)”

Busby said both he and Sessions have held jobs away from home, but both fought to get back.

“RCA Trucking is PROUD to call Opp our new home,” he said. “ A special thanks to Mayor Bracke, Councilman Jackson, Rick Clifton, Jason Bryan, and Brett Ballard for working with RCA over the last few months to make this project possible.”