San Miguel has population of ex-pats 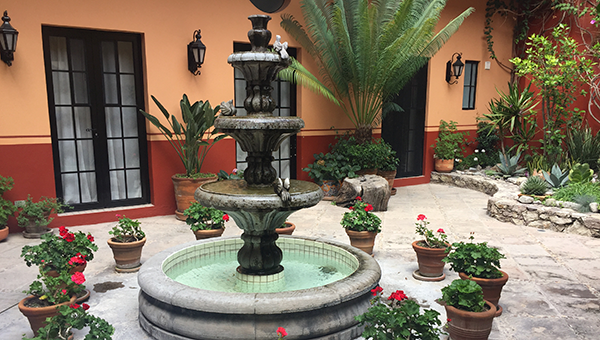 The B&B in San Miguel 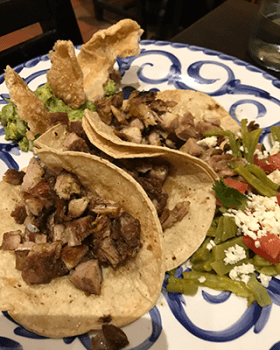 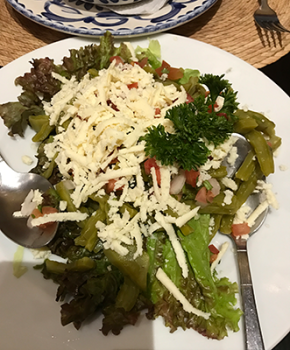 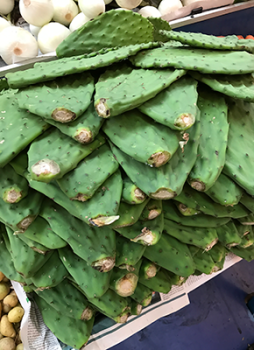 Nopales at the market.

San Miguel is a Spanish colonial town in Mexico begun in 1542. It had a prosperous period when Spain was mining silver. It was very important in the rebellion from Spain as the revolution began there in 1810 by Ignacio Allende and the town of San Miguel el Grande was renamed. Its historic colonial centro was declared a national monument by the Mexican government in 1926.

In 1938 artists began to arrive in the small town. Stirling Dickinson of Chicago became the first art director of a new school and he lured a few American students down to study. His efforts got a boost when the GI bill accredited the school for U.S. veterans in 1946. Since those days, San Miguel de Allende has continued to build its reputation as an artist community. Today, expatriates compose an estimated 10 percent of the town’s population.

It is a charming, walkable, colonial town located in the mountains so the temperature is also more inviting.

We had booked a great colonial style B&B, Antigua Capilla, which we would recommend. Drinks on the roof at sunset were especially memorable. We also had to check out Hotel Matilda. We are familiar with Matilda Stream who has a home on Esplanade in New Orleans which used to contain an exceptional collection of Fabergé Eggs which are now in the Metropolitan Museum in New York. We have also been privileged to see her art collection which includes several Diego Rivera’s. It seems her aunt, Matilda Grey, was an artist who studied with Diego Rivera. One painting he did of Matilda Stream hangs in New Orleans. Another known as ‘The Archer’ hangs in Hotel Matilda in San Miguel, owned by her son Harold Stream III, better known as ‘Spook’ as he was born on Halloween. A 1972 Mexican law made works of Rivera, national treasures. The Rockefeller family’s painting, ‘The Rivals’ by Rivera recently sold for 9.7 million. Another on Antiques Road Show ‘El Albañil’ was estimated at 1.2—2.2 million.

The Hotel Matilda is a modern luxury hotel in El Centro. We went to have a drink at the bar but wound up having lunch at their poolside restaurant. And we saw the painting and chatted with the manager about it and the others the Stream’s own.

Nopales, the pads of the prickly pear cactus, is a popular vegetable throughout Mexico and abundant in the highlands around San Miguel. It is used to stuff gorditas (thick corn flatbreads) and chopped with garbanzo beans and cilantro in a tasty stew. It is also served as a grilled side dish and chopped in salads.

We ate around town but decided the best Mexican restaurant was El Correo where we were directed the first night and we returned our last night. It was here we had our nopal stew. Our best meal was a Moroccan mezze at Casa Blanca.

Our major takeaway as far as food is concerned from San Miguel was the use of nopales in salads. They can be found now in jars where they are chopped and cooked. They are easy to find in Mexican groceries and some large supermarkets.

This salad is delicious and nutritious, but if you cannot find nopales you can substitute green beans.

Chop the tomato and onion into small pieces.

Pour the canned napoles into a strainer to drain. Rinse them under running water until the jar liquid is washed off. Leave the napoles in long strips (if that’s how they came), or chop into pieces of about the same size as the tomato and onions, as you prefer.

In a large glass, ceramic, or stainless steel bowl, toss together the tomato, onion, nopales, and finely chopped cilantro.

Place the olive oil, lime juice, oregano, and salt into a small jar with the lid on. Shake vigorously until the mixture comes together. Pour this dressing over the salad and toss again, gently but thoroughly.

Cover the bowl and refrigerate your salad for at least an hour and up to 24 hours for the flavors to meld.

Shortly before serving your cactus salad, place it in a nice serving dish or individual salad plates and decorate with crumbled cheese, onions, and a sliced avocado.