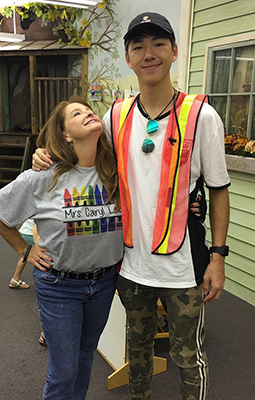 Children’s librarian Caryl Lee Ray said Sam Moore could not be seen behind the puppet theatre when he began volunteering at the APL. Now he is taller than she is. Christopher Smith/Star-News

Sam Moore says he has loved every minute of the time he has spent helping children at the Andalusia Public Library in the last five years.

Moore is homeschooled and volunteers his time helping children’s librarian Caryl Lee Ray with the library’s story time and any other events that they have.

He said that he enjoys volunteering his time because of the children.

“It is really fun,” Moore said. “The kids really make this fun.”

Moore hopes that the experience gained will help him in the future.

“I want to do something with theatre,” Moore said. “So I think that being at the library all the time and helping with story time will help me later on down the road.”

Moore started volunteering at the library after helping at a nearby church.

“I was volunteering at a daycare at a church down the road from the library every Saturday and sometimes we would take the kids to the library,” Moore said. “After meeting Mrs. Caryl [Ray], I knew that I wanted to spend more time at the library so I asked her if she needed any help.”

Ray has said that he has been such a big help over the last five years.

“I don’t know many teenage boys that are so willing to spend time with kids all the time,” Ray said. “He is such an amazing kid and I am very proud of him.”

Moore has grown a couple of inches since he started helping at the library, Ray said.

“When he started helping, you couldn’t even see him behind the puppet theatre,” Ray said. “Now his head pops over the top.”

Moore said that the best part of his job is getting to work with Ray.

“She is just so spontaneous,” Moore said. “There is no telling what we will get into, but it always somehow works out for the best.”

Moore said that everyone should come to the library for story time on Fridays.

“It is a great way for little kids and moms to get out of the house and meet friends,” Moore said. “They get to enjoy each other’s company and hear a good story.”

Moore also believes that everyone should go to the library itself at least once.

“The library is a great place to be,” Moore said. “Everyone should go at least once in their life.”

Moore has traveled around from city to city, but he said that Andalusia is his home.

Moore plans to attend college after finishing his homeschool program in two years.

“I am trying to get into a bigger college,” Moore said. “But if that doesn’t work out I will go to LBW and take classes there.”

Moore also volunteers at CandyLand during the winter and is trying to volunteer with Cookies with Characters next year. He said that he spends most of his time building a home with his father.

Moore is the son of Richard and Samantha Moore.

Wanted for kidnapping and robbery charges A man the Ohio Department of Corrections listed as wanted and dangerous was apprehended... read more