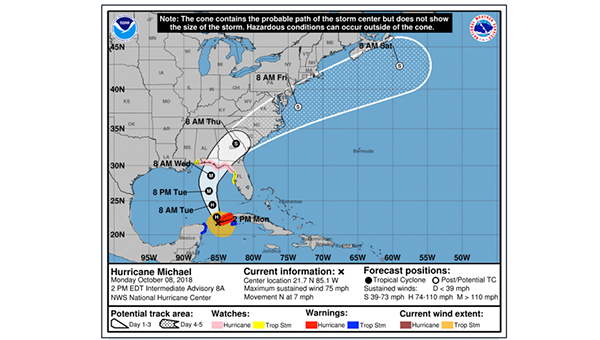 The National Weather Service in Mobile reported in its 6 p.m. update that Hurricane Michael had moved slightly west, which means hurricane warnings are now in effect along the Gulf Coast from about the Alabama/Florida line eastward to the Suwannee River.

Covington County also is now among the counties listed under a tropical storm warning.

The Monday afternoon update from the National Weather Service in Mobile puts Andalusia in a tropical storm watch area as Hurricane Michael gains strength and moves toward the Gulf Coast.

The storm, which became a hurricane Monday morning, is expected to intensify to a Category 2 or Category 3 storm by the time it comes ashore midweek. Most of Florida’s Gulf Coast panhandle is under a hurricane watch.

Gov. Kay Ivey issued a statewide State of Emergency on Monday in anticipation of wide-spread power outages, wind damage and debris produced by high winds and heavy rain associated with Hurricane Michael. Flash flooding and tornadoes are also possible with any hurricane and parts of Alabama have been placed under tropical storm watches or warnings. The State of Emergency went into effect at 3:00 pm CT.

Landfall is expected Wednesday somewhere along the Florida panhandle.