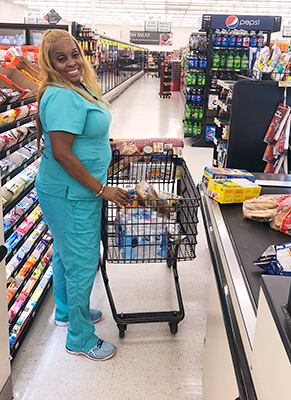 Samantha White was among the locals who stocked up on groceries at Pic N Sav Wednesday. Local grocers did a brisk business as residents prepared for a storm day. Christopher Smith/Star-News

Pic-N-Sav was among the businesses that remained open yesterday, and manager Chris Sherwood said that the two days leading up to the hurricane were very busy.

“We have people buying a little bit of everything,” Sherwood said. “Mostly canned goods, charcoal and water.”

Despite the hurricane nearing CAT 5 status and the threat of local impacts yesterday, Sherwood said that they would not close so that they could help customers.

“We never close,” Sherwood said. “We always stay open unless it’s Christmas, of course. We are here to take care of our customers.”

In the 23 years that Sherwood has been with Pic-N-Sav, he said they have never closed because of a hurricane.

“We had one a while back when we were at our other location that was so bad that we lost everything,” Sherwood said. “But since then, there hasn’t been a time that we weren’t open.”

Piggly Wiggly manager Chantz Robertson said that they stayed open for the community.

“We decided to stay open so that we could give people that haven’t had the opportunity to get what they need a chance to do that,” Robertson said. “We want to take care of the community.”

Robertson said that Piggly Wiggly has been busy since Monday with customers stocking up on hurricane necessities.

“Bread, milk, water, snacks and canned foods, all of the survival stuff,” Robertson said. “People have been buying it in bulk to prepare for the hurricane.”

Robertson said that as long as it was safe for his employees and the community, they planned remain open.

Huddle House is a known for staying open in all kinds of weather, and that did not change yesterday as Hurricane Michael approached and many other local businesses closed.

“As long as the electricity is on, we will be open,” District Manager Marlene Carpino said. “We want our workers and the travelers that come through Andalusia to feel appreciated when they come here.”

Carpino said that she offered free food to the law enforcement and state troopers who were still working during the hurricane.

“They put their lives on the line,” Carpino said. “So the least we could do is show that we appreciate them.”

Many of the evacuees from Florida are worried that when they go back to their home, there will be nothing left, Carpino said.

“They are afraid, that’s for sure,” Carpino said. “They wanted to be safe by coming up here, but they may have lost a lot when they go back home.”

A couple who evacuated from Destin was enjoying a warm midday meal at Huddle House Wednesday as Michael’s outer bands drenched the area.

David and Leigh Lenze evacuated Destin, Fla., at 8 Tuesday night, and made it to Andalusia just in time to get the last available room at the Quality Inn.

“We decided late last night [Tuesday] that we needed to head north,” Lenze said. “We own a vacation rental home business in Destin and heard that it was going to be bad so we packed up and left.”

At 9 a.m., Wednesday. the bridge to Destin was closed, keeping many of the Lenzes’ friends stuck in Florida.

“We are glad that we made it to Andalusia,” Lenze said. “This will probably be our stopping place until the storm is over.”

Roy Mohon, owner of the Marathon gas stations, said that they were extremely busy on Tuesday before the hurricane, but business was slow Wednesday.

“That’s usually how it goes,” Mohon said. “It is always busy the day before and then completely dead the day of because nobody wants to get out.”

Mohon said that Tuesday was probably the busiest day of the month for his gas stations.

“A lot of the business was local, people coming in and stocking up on stuff they need,” Mohon said. “And of course people from Florida evacuating, but we did not run out of gas at all.”

Whether the Marathon is slow or not for the coming days, is up to the evacuees, Mohon said.

“The people locally probably won’t come back out because they will be stocked up for days,” Mohon said. “Whether it is slow or not for us is if people from Florida decide to go home this week.”

Allison Mock, Manager of the Chevron on the bypass, estimated that they served at least 1,000 cars on Tuesday.

“We were extremely busy yesterday,” Mock said. “But today we are pretty slow.”

Mock said that they decided to stay open Wednesday to make sure that everybody had a chance to fill up on gas.

“There are a lot of people coming up from Florida that are still traveling and need gas,” Mock said. “We had a delivery yesterday so we are still good on gas, we don’t plan to run out.”

Put the ‘Devils to sleep

Hurricane Michael might have altered, but did not slow down homecoming festivities at Andalusia High School. Students participated in Pajama... read more