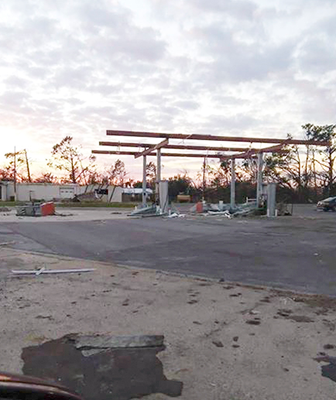 Hayden McLeod said scenes like this one are everywhere in Panama City. Courtesy photo

Food, supplies scarce for some in storm’s path

After traveling to Panama City to deliver supplies to a friend in need, Hayden McLeod and her family have learned to not take anything for granted.

“They lost everything in the hurricane,” McLeod said. “They looked up during the hurricane and just saw the sky. It ripped the entire second story of the house off. They are still living in the house, just with a tarp over the roof.”

The McLeods and two friends, Angie and Jeff Davis, traveled to Panama City on Sunday to help.

“We brought clothes, food, water, bread, frozen ham, drinks, charcoal and pans,” McLeod said. “When we saw them they were filthy, they were washing their hands from buckets.”

McLeod said that the food shortage is so serious in Panama City, that if need be their friends will butcher their livestock.

“It is that serious,” McLeod said. “They have livestock and they said that if need be, they will butcher their animals.”

The family also does not know where to send their children to school, McLeod said.

“They have three children ages 16, 17 and 18,” McLeod said. “One was getting ready to graduate, but now they don’t know what will happen. They are looking to separate their kids to send them to school.”

McLeod said that even the slightest notion of kindness goes a long way for the people in Panama City.

Even the McLeods’ daughter knew the impact of the hurricane.

“After we left, my five-year-old daughter looked up at me and said, ‘I don’t like hurricanes,’” McLeod said. “I didn’t think that she would understand, but she was watching the whole time and taking it in.”

Now, McLeod said that her perspective on life has changed.

“We take everything for granted,” McLeod said. “We have these at home and we don’t think about what would happen if we lost everything.”

While the McLeods and Davises were in Panama City they also took clothes to donate as well as pillows and mattresses.

“A lot of people don’t even have a mattress to sleep on,” McLeod said. “So we decided to donate pillows and mattresses as well.”