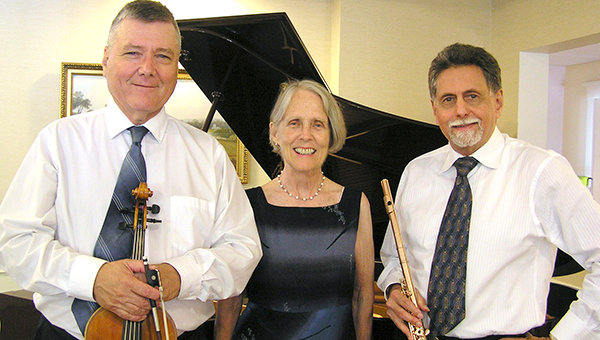 The Andalusia Chamber Music Society (ACMS) brings Ensemble Aubade, a Boston-based group on flute, viola, and piano, for a fall concert on Nov. 11, 2018, 3 p.m., at First Presbyterian Church of Andalusia.

“These talented musicians will perform in Andalusia as part of a seven-city Southeastern tour, from Mississippi to South Carolina, and we are delighted to present the community with the opportunity to experience exuberant chamber music.”

Bloom, flute, whose playing has been called “a revelation for unforced sweetness and strength” (The Boston Globe), performs in the U.S., Canada, Europe, and the Far East; is featured on more than 40 recordings (Sony Classical, Dorian, Leo Records, other labels); is a faculty member of the Snow Pond Composers Workshop; and is a winner of the American Musicological Society’s Noah Greenberg Award. He has concertized with chamber ensembles in London, Bangkok, Canberra, Wellington, Ottawa, and other world capitals, and in hundreds of cities across 40 states and four continents. He is also a noted jazz artist, veteran of the internationally acclaimed Aardvark Jazz Orchestra, now in the 46th season.

Grimes, viola, has performed with the Boston Pops, Boston Opera, Boston Ballet, Masterworks Chorale and other distinguished ensembles; toured nationally with the Star Wars Orchestra; and performed with choral groups in Italy, England and the Czech Republic. He completed his BM at Indiana University as a student of William Primrose.

Rupert, piano, praised by The New York Times as exhibiting “indeed real sensitivity,” has performed throughout the world from Carnegie Recital Hall to the Beijing Concert Hall. She has appeared with chamber ensembles, choral groups and orchestras across the United States. She serves on the faculties of Boston College and Tufts University and taught previously at MIT, Wellesley College, and Western Michigan University, among others.

Bloom and Rupert, performing as the Duo “2”, have toured New Zealand, Australia, Thailand and across the United States.

ACMS fall concert tickets are $15 for adults and $10 for students, available at LBW Community College President’s Office, or by calling 334-881-2212.

Company got $173M contract, expected to locate at SARA