After hearing about with widespread damage caused by Hurricane Michael, WAMI Radio’s Parker Paige contacted one of her friends in Snead, Fla., last week and traveled to take her emergency supplies. After seeing the devastation with her own eyes, Paige organized a fundraiser for the Snead area and has gotten a massive response from the people in the county. 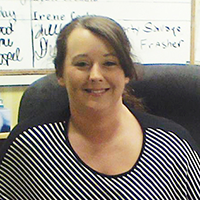 “Pictures do not do the destruction justice,” Paige said. “My friend is a single mother of five children and she lives in the Snead area so I contacted her on Facebook. She was left with nothing after the hurricane so I knew I had to help somehow.”

A week after the hurricane passed through, the Snead area still doesn’t have power or water.

“A lot of people are going without the necessary needs of survival,” Paige said. “There are no shelters, so people are looking for a place to shower or wash their clothes. They can’t even travel out of the county because they don’t have a car or any money.”

After praying on the situation, Paige decided to put together a relief item fundraiser.

“I prayed on it and knew that this is what I had to do,” Paige said. “I called my sister, who lives in Auburn, and she came down and is helping take up donations. My family is going to head out on Saturday again to take supplies down to the Snead area.”

Paige said that residents of Covington County and the surrounding area have been so supportive.

“Everything that the people in Covington County have provided has been more than enough,” Paige said. “They have truly come together. We have received $1,700 of just cash. With that money, we are going to buy stuff here in Opp, so it will go back into the area, and use every bit of the money to buy items for these hurricane victims. Bonnie Rae has also been a tremendous help loading stuff up. We have been working together on a lot of this and she has been amazing.”

Paige said that they are still taking up donations until Friday at 5 p.m., at the WAMI Radio station in Opp.