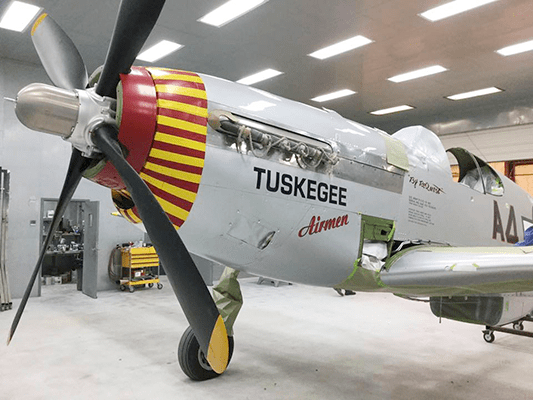 The WWII-ear P-51C Mustang will fly at the airshow.

The final entertainment was added for next month’s Thunder Over Alabama, the South Alabama Airshow, when the Tuskegee Airmen agreed to perform.

“It took a lot of convincing, but they are coming,” South Alabama Regional Airport Director Jed Blackwell said Wednesday.

The CAF Red Tail Squadron is committed to telling the inspirational story of the Tuskegee Airmen, America’s first black military pilots and their support personnel.

The pilots and support personnel – both military and civilian, male and female – that served with the segregated 332nd Fighter Group and 477th Bombardment Group during World War II and before the integration of the Armed Forces are considered Tuskegee Airmen. The name originates from the segregated flying training program at Tuskegee Institute Army Air Corps Program, a unit at Tuskegee Army Air Field, located in Tuskegee, Ala.

“Red Tails” was a nickname given to the Tuskegee Airmen during their time in service during World War II. It evolved from the bomber pilots referring to their Tuskegee Airmen fighter escorts as Red Tail Angels because of their reputation and record for keeping the bombers safe on their dangerous missions over enemy territory.

Today, the CAF Red Tail Squadron includes an airworthy P-51C Mustang and the Rise Above Traveling Exhibit mobile theater. The vehicles tour the country year round with stop at airshows, schools, museums and community events.

The airshow is set for Sat., Nov. 17, at South Alabama Regional Airport. Admission to the event is free. Gates open at 9:30 a.m., and aerial performances begin at noon. The show continues until 5 p.m.

In addition to the sky performers, there will be live music, food vendors, arts and crafts, and children’s activities all day.

Roger and Cathy Powell’s backyard became an art classroom on Wednesday, as students in a three-day class moved their easels... read more