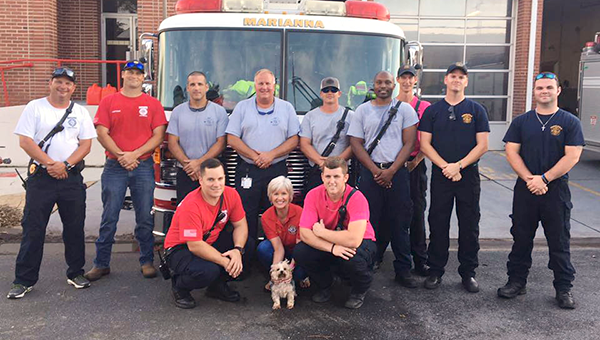 The Andalusia and Opp Fire Departments partnered up to travel Marianna, Fla., to help their fellow fire departments after Hurricane Michael.

Spurlin said that the devastation in Marianna is still affecting the community.

“It is still terrible there,” Spurlin said. “It is still a mess. The power is going to be out for a while, stores aren’t open, the pictures don’t do it justice and this wasn’t even one of the towns that was hit the hardest.”

The group went down to Florida because the fire chief in Marianna called Spurlin to ask him for assistance.

“Chief Lovett called me and asked if we could go down there and help with routine fire calls,” Spurlin said. “So I called Russell McGlamory, the Andalusia fire chief, and with the mayor’s permission we sent a group of our guys down there.”

Along with the routine fire calls, the group helped with clearing the roads in Marianna.

“On Monday we helped clear roads,” Spurlin said. “There are still lots of roads that aren’t cleared yet. A search and rescue team from South Florida came as well to go to each house and knock on doors to make sure they aren’t missing anyone.”

Spurlin said that they had to respond to a couple of construction fires while there.

“A lot of people down there have improperly wired generators,” Spurlin said. “So that is what is causing a lot of the fires that we responded to.”

Despite the tragedy, Spurlin said that going to Marianna was rewarding.

“You really find out who the good people are during a tragedy,” Spurlin said. “Being able to help our neighbors during something so traumatic is very rewarding. The people were very appreciative of our being there and that meant a lot to us.”

Andalusia Fire Chief Russell McGlamory said that he was more than happy to send some of his firefighters down to Marianna.

“I was working here when Opal hit, and there were so many volunteers that came here to work,” McGlamory said. “So when they asked me if I would send my guys there were several guys willing to go.”

McGlamory himself did not go, but he said according to the group that went, the devastation is still horrible.

“According to my guys, it is a lot worse than what we are hearing about,” McGlamory said.

McGlamory said that if the Marianna Fire Department called again, he would gladly send more people.

“We had so many guys willing to suit up and go,” McGlamory said. “So if they call again, we most likely would send people.”