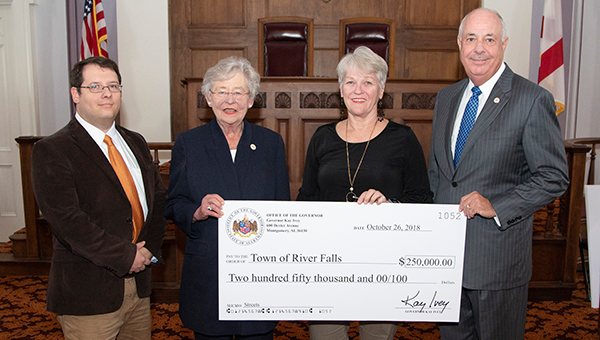 The City of Andalusia received a $280,000 grant for street improvements. When the city council agreed in July to pursue the grant, Bob Carter of Goodwyn Mills and Caywood said the funds, which require a local $75,000 match, would be used to repair streets north of city hall and the courthouse. A separate project being done by the Utilities Board will address repairs to streets in the south side.

The Town of River Falls received a $250,000 grant for street improvements, and Dozier was awarded $247,510 for demolition and clearance.

“The beginning of a better Alabama starts today for many residents who are without clean water to drink or safe roads to drive or suitable housing in which to live,” Ivey said. “I am pleased to award these grants to support vital community improvement projects, and I commend the dedicated local officials who sought these grants with the intent to make their communities better places to live.”

Community Development Block Grants are awarded annually through a competitive process in four main categories including small city, large city, counties and community enhancements. Other categories in this round include Black Belt and planning grants. Award determinations are based on the number of low and moderate-income families affected, urgency of the need and project cost efficiency.

The Alabama Department of Economic and Community Affairs is administering the grants from funds made available by the U.S. Department of Housing and Urban Development.

Others among the 55 municipalities and counties receiving grants included: