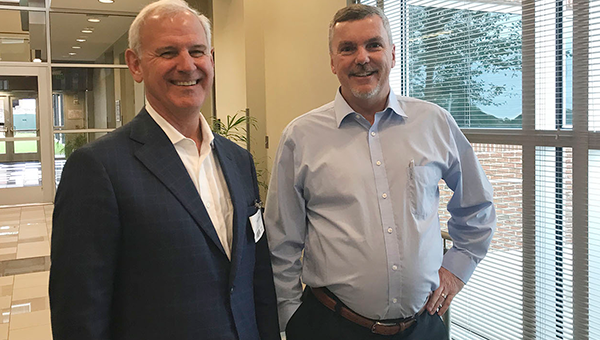 U.S. Rep. Bradley Byrne, R-Fairhope, confirmed in Andalusia on Friday that he is considering a run for the U.S. Senate in 2020.

Byrne, who represents Southwest Alabama in the U.S. Congress, was the guest speaker Friday at PowerSouth’s annual ACRE luncheon. ACRE is the federal political action committee of the nation’s electric co-ops.

“We will have an election in 2020 for a U.S. Senate seat,” Byrne said in response to a question. “I enjoy my job in Congress, and I am honored to be there. But we need someone who wakes up understanding people like all of you in the U.S. Senate from Alabama.”

Byrne said he is currently travelling the state talking about the opportunity to seek the seat currently held by Sen. Doug Jones, a Democrat.

Byrne, who is a former state school board member, a former state senator, and the former chancellor of the Alabama College System, said Congress is not as polarized as it appears in reports by the national news media. During his time in Congress, he said, the U.S. House of Representatives has passed more than 1,000 bills, and 80 percent of those were bipartisan efforts.

“That wasn’t news,” he said. “But I don’t spend one second of my time on the Russia investigation or dealing with Stormy Daniels.”

“Your lives are lived making sure you can pay your bills, take care of your kids, and deal with the basics of life every day. That’s what Congress should be and is focused on every day,” he said.

Byrne praised the efforts of PowerSouth employees in recent weeks to restore power to areas ravaged by Hurricane Michael, and compared their efforts to keep people safe with the efforts of Congress to make sure the military is equipped to keep the nation safe.

Congress has increased defense spending, he said, adding that Secretary of Defense Jim Mattis, a former Marine Corps general, has made good decisions to strengthen the United States’ position in the world.

“You and I are safer because of this,” he said.

Increased military spending generally helps Alabama, he said, because of military interests in Huntsville, Anniston, Ft. Rucker, Maxwell Air Force Base, and the shipyards in Mobile.

Asked if Republicans are likely to maintain power in the House after November’s mid-term elections, Byrne said it is very likely the GOP will lose seats.

“We have a 23-vote majority,” he said, adding that a number of close Congressional races are polling within the margin of error.

“Regardless, there will be a tighter margin,” he said. “That makes it very difficult to govern. We will have to work together, and be able to work across the aisle.”

He said several races are so close, it probably will not be clear on election night whether the GOP or Democrats will control the House.

At the age of 14, Morgan Pridgen is exploring a new setting in education as he adjusts to a classroom... read more