WANT TO GUESS HIS NAME? 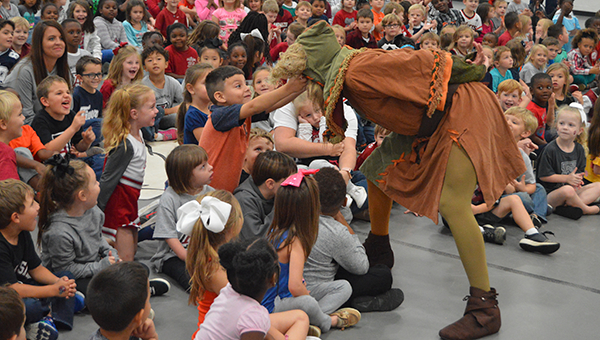 Jesse Byron a.k.a Rumpelstiltskin interacts with the crowd. Christopher Smith/Star-News

The play is based on a fairytale associated with Germany and published by the Brothers Grimm in 1812.

“We want students to be more aware of other possibilities with the arts,” Johnson said. “Maybe some students have talents that they are thinking about pursuing and this could spark something inside of them.”

Director Charlotte Sehorle said that the theatre troop will travel for six weeks all across Alabama, and will perform for three to four schools a week.

“This is one of the biggest and oldest theatres in Birmingham,” Sehorle said. “We travel to so many schools in Alabama to promote the arts at a young age.”

The play was performed for the Pre-K through second grade students. Members of the AES Drama Dawgs club also watch the play, and met with the actors afterwards to ask questions.