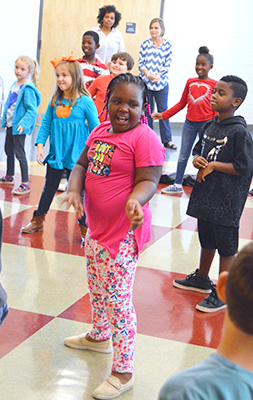 Rebecca Yeager has been teaching STEAM – science, technology, engineering, art and math – classes at Andalusia Elementary School to help students understand that all of the subjects are intertwined.

Art and music teacher Cathy Powell brought Yeager to AES, thanks to grant funding provided by the Alabama Arts Initiative. Yeager is director of education at Birmingham Children’s Theatre.

Yeager said that it is important for students to learn about the arts, because the arts support every other subject.

“The arts are valuable on their own, what dance, visual arts, music and theater can teach a kid about themselves and the world,” Yeager said. “But then to be able for them to look at it and say, ‘Now wait, this has something to do with my math, history and science classes.’ I think the arts are key for kids to be able to understand that it is all integrated and intertwined.”

“That is just what kids are supposed to do,” Yeager said. “That’s your job as a kid. It is to play and create and for me to be able to give a little structure to that is so valuable.”

“Today was math, three is a magic number. Last week was photosynthesis, and the week before that was space,” Yeager said. “We traveled around the solar system and figured out why Earth is the best place for us.”

Yeager said that it is important for her to branch out to other school systems in more rural areas, because the arts are being pulled out of school systems.

“Birmingham is really arts rich,” Yeager said. “We have a lot of theaters and music, so it is really a great hub for the arts in Alabama, but even our schools here in Birmingham are starting to pull the arts. When we get away from the big cities up north and move to these more rural areas, we see that these schools are even more art starved. It’s not necessarily a priority, so when we are able to bring theatre professionals to students, it is so valuable to what I do as an actor. The more kids exposed to the arts, the better our world is.”

Both Powell and Yeager said that the participation from the students has been amazing.

“I think it is a very good outlet for the kids that don’t necessarily learn that well stuck in a classroom,” Powell said. “They can learn these concepts by being able to move and get all their energy out.”

Yesterday was the last day of the STEAM stories, but Yeager will come back to AES to help with the AES Drama Dawgs, the club that meets monthly.

“I get to help with both of the drama groups here,” Yeager said. “Really just teaching them the basics of acting.”

Yeager is a native of Birmingham. She is married to a scientist and they have two small children.

She attended the Birmingham Southern University and earned her MFA from the University of Southern Mississippi.

Auditions for a spring production of the Tony-nominated Broadway musical Mamma Mia! have been set for November 13 and 15... read more