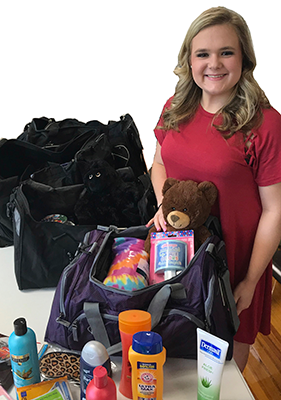 Jesse Jane Bush is using her experience in the foster care system - being handed a trash bag and told to ‘get some clothes,’ as inspiration to make the foster care journey a little easier for others.

When Jesse Jane Bush heard the assignment for her senior English class – Be the Change! – she knew immediately what her topic and project would be.

“I automatically thought something to change foster kids, or the way that they are treated,” she said.

Bush knows the subject up close and personal. She was first placed in foster care before she started to school. She was handed a trash bag and told to get some things.

“You don’t know for how long you’re going,” she said. “I think I had a pair of pajamas. Without a warrant, the police could not help me pack; I had to do it.”

Many years later, she remembers all of the emotions.

“I was scared,” she said, “I was blaming DHR (in another state) because I wanted to be with my mom.”

As she was putting things in her bag, she could hear her mother in the next room begging authorities not to take her child away. It was traumatizing, she said.

Later, her mom worked with child welfare officials to establish a safety plan, and moved to a women’s shelter where Jesse Jane could safely live with her. Her father had already died.

The years that followed were chaotic. She and her mom lived in at least 40 different places, and she was enrolled in 27 different schools in at least four states.

But when Jesse Jane’s baby sister, Kinsley, was born, the desire to be with her mom changed.

“When my sister was five months old, we were at the races in Kinston,” she recalled. “My mom went to the bathroom and never came back.”
It was October. Both 11-year-old Jesse Jane and Baby Kinsley were dressed for the warmer afternoon temps.

“I didn’t have a phone, so I couldn’t call her,” she said. “My sister had no formula, no jacket, and no diapers. I went to a family friend I had known a long time, and we left with her. We had to feed a five-month-old regular milk.”

When the friend took the girls to the police station to meet DHR, their mom was already there, under arrest.

“She left to get drugs, and got pulled over,” Jesse Jane recalled.

The girls spent the night with Jesse Jane’s best friend, and DHR worked on a safety plan.

At first, they were placed with an aunt in Florida.

“That didn’t work out, so they put us with my grandmother. My grandmother also has a substance abuse problem, but hers is in pill form. While my sister was with her, my granny overdosed. I was in the fifth grade.”

When that safety plan ended, the girls went back with their mom and a friend. But again, DHR intervened, less than a month after the girls had been abandoned at the racetrack.

“I was at school when DHR came and picked me up. They took me home and said, ‘Pack you and your sister some clothes.’ ”

She remembers being more concerned about packing for her baby sister than herself. She managed to pack a diaper bag for the baby, and put three of her own outfits into a garbage bag. She forgot her toothbrush.

The two sisters went to the DHR office and waited while workers sought foster parents for them.

“We were there until about 6 that afternoon,” she said. “They had trouble finding someone who would take both of us, and I put my foot down. I was not going without my sister.”

She describes the wait as the scariest four hours of her life. But the end result was totally worth the it: Chaz and Summer Bush agreed to take both sisters.

“She wanted an older kid, and he wanted a baby. They both wanted girls,” Jesse Jane said.

Three years later, the Bushes adopted the sisters. She’s very proud to be a member of the Bush family, but she hasn’t forgotten that wait, and those initial hours of foster care.

For her Be the Change! project, she is seeking donations of and for Jesse Jane Journey bags to be given to children when they enter foster care. She has some specific requests for those bags, based on her own experience.

For instance, a night light.

“This night light only costs about $1,” she said, using a recent purchase as an example. “I remember my room was so dark, and I was terrified of the dark. My parents let me leave the big light on, but just having a little nightlight, I would not have been so worried.”

She also is requesting luggage tags for the bags.

“So that means it’s yours. You actually own something,” she said. “Other people have everything. You have nothing. Just a little luggage tag would have made me happy.”

As for the other toiletries, she said, many foster parents have less than an hour’s notice when they pick up children.

“I hated asking for things,” she said. “My mom was very attentive, but it was my own pride.”

She’s learned from counselors that many children in foster care pack their bags every night, preparing for the chance they’ll be moved again, and not wanting to risk losing the few possessions they acquire.

“I never did that,” she said. “I hid my bag because from the first day, I did not want to go back.”

What she now knows from the research she’s done for this project is that her story is not unusual; most children placed in foster care go there because their parents have a substance abuse problem. Alabama places an average of 3,400 children in foster care per year.

Long-term, Jesse Jane plans to pursue a degree in social work and help children who, like her, need to be placed in caring homes.

But meanwhile, she is working on Jesse Jane Journey bags, and seeking contributions to help ease the transition to foster care for those kids like herself who are removed from their homes at a moment’s notice.

With the help of her teacher, Dawn Thompson, A Go Fund Me Account (Jesse Jane Journey Bag) has been established, as well as an Amazon.com wish list (search for Dawn Thompson). Items ordered from Amazon for the project will be shipped to Thompson’s home.

Drop-off boxes also have been placed at Larry’s BBQ, where Jesse Jane works after school, and at The Star-News.

“Ninety percent of those in foster care are also in counseling,” she said. “Writing is the No. 1 coping tool for them.”

Something eerie about disappearing wedding veils If there is a ghost at Springdale, as suggested by the title of last night’s Covington... read more