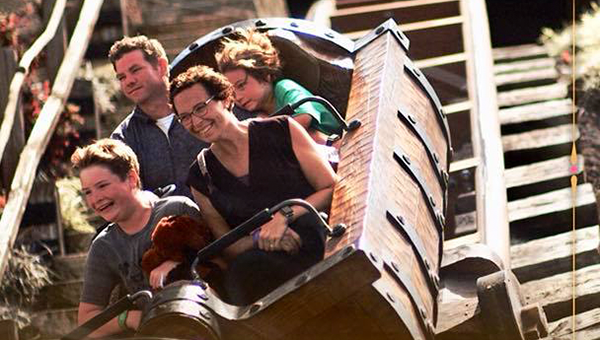 Breast cancer survivor Lori Foreman is shown on a recent trip to Disney World with her husband, Ben, and sons Jack and Kimbro. Her year-plus of treatment was very much a roller coaster, she said.

Breast Cancer Awareness: Forever changed, and OK with it

Lori Sansom Foreman said cancer is the hardest thing she’s ever had to live through. The illness changed her, and changed her family, but even in the darkest places, she said, God has been with her.

Foreman was 36 in May of 2017 when she was diagnosed with Invasive Ductal Carcinoma – ER/PR/HER2 positive Breast Cancer – Stage 3a.

Initially diagnosed at the Breast Health Center at Flowers Hospital in Dothan, she went to the UAB Breast Center at Kirklin Clinic.

“I loved the team of doctors I met there,” Foreman said. “Ironically, that same week my husband’s job required him to be in Houston, Texas, for 10 days so we took that opportunity to reach out to M.D. Anderson Cancer Center and they were able to get me in to see them while we were there.”

After two weeks of testing, both M.D. Anderson and UAB agreed on a treatment plan: six rounds of TCHP chemotherapy – four different drugs administered every three weeks – followed by surgery, and then 33 rounds of radiation.

“Due to the fact that UAB had a clinical trial that I could participate in due to my hormone positive cancer, my team of doctors at both hospitals felt I should go there for treatment,” she said. “Prior to my chemotherapy, I received two rounds of a clinical trial drug called Kadcyla. I also continued to get an infusion of a hormone therapy called Herceptin every three weeks from June 2017 through August 2018.”

In January, the pathology from her surgery showed a complete pathologic response to treatment, meaning there was no active cancer found.

“My oncologist says that nobody gets a guarantee, especially with breast cancer, but considering my initial diagnosis, these were the best results I could get,” she said.

Early on, Foreman started a blog about her experience, sharing the highs and the lows. Last week, she shared some thoughts about getting through the healing process and being a survivor.

“ I’ve actually had two friends diagnosed with breast cancer since I finished treatment,” she said. “My best advice initially is to find a team of doctors that specialize in breast cancer and let them talk to you about a plan. The waiting all throughout the process is excruciating and talking to a team that you trust and that have knowledge and can tell you what is happening is the best possible defense against the waiting.

“Secondly, I would say to find someone who has been through it and reach out to them. I have yet to speak to any breast cancer survivor that wasn’t willing to share her story or be a support to me. And I have loved being able to do that for others,” she said. “As much as your closest family and friends want to be there for you, there is something emotionally healing in talking to the ones that have walked this very road. We always say that it’s the club you never wanted to join, but you find the very best people there. That has certainly been true for me.

“Third, let others be in it with you. Your family, friends, community want to love you in this. They want to be a part of this hard thing, she said. “Accepting help did not come easily to me but this community rallied around me in ways that still amaze me. I have an entire box of cards and letters from the last year and a half that I continue to read, even now. Let people reach out and be a support. It will make all the difference.

“I told a friend recently, ‘There are going to be a million different ways you’re going to have to be a hero in all of this. Don’t try to be one when you don’t have to. Take the help when it’s available. Do what you need to do.’

Cancer taught her many lessons, she said, but the biggest was that life is fleeting, and the most important thing is to love people and to love Jesus.

“ We studied the first chapter of James in my Sunday School class last week and I was struck by verses 10 and 11 of that passage in a way that I never had been before,” she said. “It is talking to the church about living through hard times with joy and it says: ‘But the rich should take pride in their humiliation – since they will pass away like a wild flower. For the sun rises with scorching heat and withers the plant; it’s blossom falls and its beauty is destroyed. In the same way, the rich will fade away even while they go about their business.’

“The brother of Jesus is reminding the rich, comfortable, and privileged that none of us is getting out of here alive,” she said. “Last year, I was faced with my own mortality in a way that I never had been before and it was a terrifying and difficult experience of me, but the truth of it is that we will all face that at some point.

“I was born into sort of the bulls-eye of privilege: middle-class; intact family; white; American; Christian – it really hasn’t been difficult for me to live a comfortable, fun, and easy life,” she said. “But the last year has taught me that this life is fading and fleeting and what matters is loving God and loving people. And if I’m not doing that, I am missing the point entirely. And there is just no time to waste.

“Too many people are hurting; too many are being oppressed and marginalized; too many are lonely; too many are living their last days without helping hands,” she said. “And I’m here to love them. And advocate for them. And stand in the gap for them. I’ve learned many different things this past year, but I think the most important is that this life is tender and precious and fleeting and I don’t want it to fade away while I’m selfishly just going about my business. God has shown me through this that the beauty here is found in loving others.”

She is, she said, forever changed.

“Cancer changed me in a million different ways. I feel like my whole life was broken into tiny pieces and I haven’t been able to put it back together in just the right way again,” she said. “And maybe that’s a good thing. Certainly I lost some things that I continue to grieve today and will probably always grieve this side of heaven so that’s one major change in who I am now compared to who I was before.

“But I think the most noticeable change in myself is that I have found a lot of freedom in being willing to say ‘I don’t know’ and just let it stand. Before, I needed answers to everything. I had to know what was right and what was wrong and then let the world know what I decided was ‘right.’

But this last year, there were things I couldn’t answer. There were days that didn’t have a definite right way. And I had to just live in that.

“And since then, I’ve chosen to stay there,” she said. “And I’ve found a lot of joy and goodness and mercy in this place. Now, instead of deciding what’s right and wrong about any situation, I just look for the people that are hurting, the ones being pressed down, and I stand with them because it’s always the place where Jesus stood.

“Instead of telling everyone what they should do in a situation, I just look for the fruit of love, joy, peace, patience, kindness, all those things and I join them because that’s where life is found,” she said. “I’m just not willing to pretend anymore. There are so many more important things than pretending to know it all. Instead of wasting time on what’s right and what’s wrong, who’s in and who’s out, let’s just get on with loving people.

“I don’t need to have all the answers anymore because I know that on the other side of every conflict is a human person created in the image of God. I’ll just get on with loving them and let someone else decide if I’m doing it right,” she said.

“Cancer is the hardest thing I’ve ever had to live through. And honestly, I wish it had never happened,” she said. “But God has been in this place. In the darkest days and nights, Jesus has remained the one true and pure thing. I have found that His gospel stands – even here. I’ll never get over being awed by it and grateful for it.”

Lori Foreman and her husband, Ben, have two sons, Jack and Kimbro. She works with the United Methodist Children’s Home.

After seeing the devastation of Hurricane Michael first hand in Fountain, Fla., Jared and Crystal Day set out to do... read more