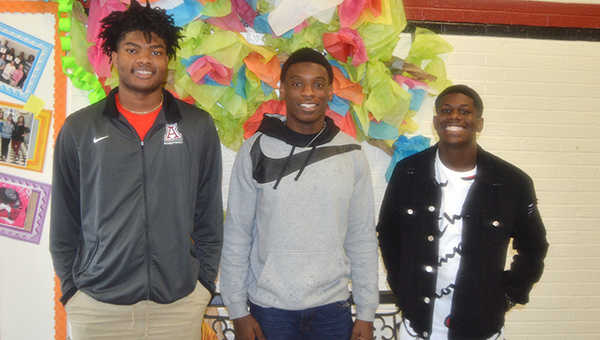 Keaun Samuel, Roosevelt Weaver and Ryan Mays plan to have a tailgate party for the residents of Andalusia Manor for their Be the Change senior service project.

Three Andalusia High School senior football players are giving back to the community by throwing a tailgate party for the residents at Andalusia Manor.

Roosevelt Weaver, Ryan Mays and Keaun Samuels got the idea do something for the senior residents at Andalusia Manor for their Be the Change! Project from their English teacher, Dawn Thompson.

“She gave us the idea to do something with the residents, because my mom works at the Manor,” Mays said. “We just ran with different ideas from there.”

The group said that they were going to have an Iron Bowl tailgate for the residents, but they did not want to interfere with any plans the residents may have for the game.

“We didn’t know how many may be going to the game or if they had other plans,” Weaver said. “So we moved it to this weekend and are going to have a regular tailgate party.”

The group thinks that their project is unique because no one throws tailgate parties for senior citizens.

“We are the only ones in our class to do something like this,” Mays said. “No one else is throwing a tailgate party for the elderly.”

They hope that their party will help the residents at the Manor.

“I think that it will make them feel like people still care about them,” Weaver said. “Maybe if we do this then they won’t feel lonely.”

Since each senior in Thompson’s class has to write a research paper related to their service project, Weaver said that he is researching the effects of loneliness.

“I will be doing mine on the causes of loneliness,” Weaver said. “And especially on how you can improve if you’re in a situation like that.”

“I am not doing mine specifically on the service project,” Samuels said. “But I will tie in the project by asking some residents what their experiences are with racism.”

Mays’ research people will be on dementia.

“I’ve noticed that a lot of people in nursing homes struggle with dementia,” Mays said. “So I will be tying our service project in that way, researching about their experiences.”

The group agreed that hosting this service project will help them write their papers.

“I think getting to do hands-on research will definitely help us write our papers,” Mays said. “We will get to talk to people and know what they are going through.”

Seeing the residents happy and having fun is what the group is looking forward to the most.

“I think seeing them smile is going to be the best part,” Weaver said. “Seeing the residents happy will make it all worth it, and I’m excited to play some corn hole with the residents.”

The tailgate party will be Sat., Nov. 3, at 2 p.m., in the dining room of Andalusia Manor.

The residents of the Manor and any attendees are asked to wear their favorite team colors.

The group said that they will decorate the dining hall to look like a tailgate.

“We have a lot of little football fields and different games,” Mays said. “We will also have some good tailgate food.”

LBW Community College will hold the Ms. LBWCC Pageant on Nov. 15, 2018, in the Dixon Center for the Performing... read more