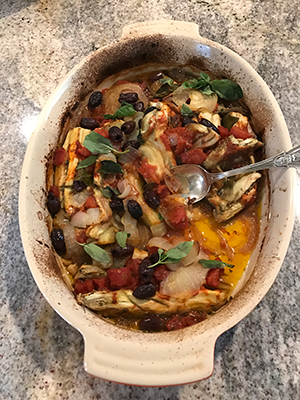 Editor’s note: Long-time food and garden columnist Connie Anderson is ending her column this week. She will be missed.

As everyone knows I am a fan of Frank Still and all his restaurants but the October ‘Food and Wine’ had a special article about Mr. Stitt and his relationship with Richard Olney.

In the mid-1970’s Mr. Stitt was a philosophy major at the University of California, Berkeley, concerned with aesthetics, the creation of beauty, and the pursuit of authenticity. Where he found all that, though, was in the kitchen work at Chez Panisse with Alice Waters. Alice Waters knew Richard Olney and had used his cookbook The French Menu Cookbook as a touchstone for her restaurant. Olney became a friend and mentor to Waters. The philosophy at Chez Panisse was a radical departure from what was happening in other American cities. And Stitt wanted to go to the source of it, to meet Olney himself. So Waters helped make that possible.

Stitt met the 51-year old Olney in the spring of 1978 in the Time-Life studios on Conduit in London, where Olney was producing The Good Cook, a groundbreaking series of 28 instructional cookbooks. Chef Jeremiah Tower was there too, and joined Olney in France on a jaunt from Paris to Provence to cook and eat. Tower was later a chef at Chez Panisse. Olney needed an assistance and Stitt was that person.

Stitt reported for duty in Provence with a gift of fresh morels. Stitt said, “I was going to the mountain to sit with Buddha.” That month was one of the greatest highlights of his life. It was at dinner that the main lessons took place. A pilgrimage to Olney’s meant four courses matched with a progression of wines of growing intensity. And Scotch. Dinners would last until 2 a.m. sitting under the arbor and drinking Laphroaig. At his table, Olney conjured a vision of how one might live a beautiful life, with food and drink at the center.

Stitt traveled across Europe chasing the magic of being at table. He harvested grapes and made wine but the eventually came home to Alabama. Stitt’s journey parallels that of American cuisine, an awakening that started in earnest four decades ago as the country slowly emerged from a post-war fog of convenience food and buffets of prime rib and bananas foster.

There is a framed photo of Richard Olney on the wall of Chez Fonfon, Stitt’s bistro. Blink and you will miss it, but Olney’s values and the magic and beauty of being at table endures.

Mr. Stiff created a seasonal menu to celebrate Richard Olney and some of the ingredients and wines he loved. The menu is so fresh using what is in season like figs with ham and walnuts, apple tart with an apricot glaze, zucchini and herb-stuffed chicken. I chose to cook the eggplant and tomato gratin. It was so earthy and delicious I have made it twice, so far.

From ‘Food and Wine, October’ 2017 but the first version originally appeared in The Good Cook.

5 medium tomatoes, cored and cut into 6 slices each

Trim stems from eggplants. If using medium eggplant, cut in half lengthwise. Cut small eggplants or medium eggplant halves into 7 slices each, cutting to, but not through, stem end. Eggplant should be able to be fanned out without falling apart.

Cover dish tightly with aluminum foil. Bake in preheated oven 15 minutes. Reduce oven temperature to 375°F (do not remove dish), and cook until eggplant is almost tender, about 1 hour and 10 minutes. Remove and discard foil, and bake until juices are slightly reduced and eggplant is very tender, about 20 minutes. Garnish with torn basil.