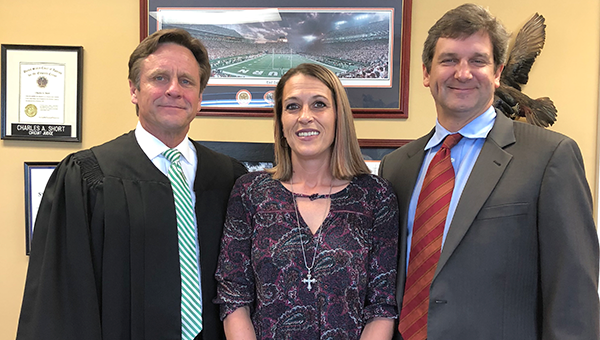 Someone once said, “Strength doesn’t come from what you can do; it comes from overcoming the things you once thought you couldn’t do.”

When Jamie Kimbro pled into Drug Court in May of 2013, she said she “was doing what she felt was best to get the felony off of her record and, maybe, get herself clean in the process.”  She had already tried rehab multiple times, with no long-term sobriety, and admitted she didn’t have much hope that this would work. But she wanted to keep the felony off her record.

Persons are eligible for Drug Court if they have committed a crime related their own drug use. Requirements for completion of Drug Court can include participation in recovery treatment, attending recovery meetings, random drug testing, getting a GED if necessary, appearing in court once per month, maintaining employment, and paying court costs. The program lasts a minimum of a year for persons charged with a felony. Upon sucessful completion, the charges are nol prossed.

Addicted to Xanax, opiates and even the suboxone she had been given to get off of the opiates, Kimbro was sent to a residential treatment facility by Drug Court Judge Lex Short in March of 2014.  he remained there for 90 days and completed the first two phases of that program. However, by her own admission, she “just couldn’t get it right.

“I was scared to be sober,” Kimbro said. “I didn’t know how to live. So, I relapsed. Then, I ran from Drug Court for six months because I was using again, and I had resigned myself to my failure.”

Because of that resignation, Kimbro acknowledged that she “didn’t have any plans on doing right.”

When she failed to appear in court, a warrant was issued for her arrest. When she was arrested, she was in the depths of a dark relapse.

“I was glad I got arrested,” she said. “At least I could stop running, but I had no hope.

“In July, I came over for court. I asked them to terminate me. I had no plans on ever doing right, so I just wanted to go on to prison and just get my time behind me,” she said. “That day at court, I was back with the other inmates and Sabrina Cobb (Drug Court Coordinator) came and escorted me to District Attorney Walt Merrell’s office. As soon as I got there, I asked him to just send me to prison. I wanted to give up. It was easier to use than it was to find sobriety.

“He could have taken the easy road and given me exactly what I asked for,” Kimbro said. “Instead, he resisted, and he actually started ministering to me. He built me up and reminded me of the value that I had inside of me. At the end of that conversation, I won’t ever forget what he said to me.  He asked me, ‘Do you still want to give up on yourself, or do you think you are worth fighting for?’

“He then told me he was willing to fight for me, and a lot of other people were, too,” Kimbro said. “That day is when I knew I could find sobriety, and I started fighting.”

Kimbro said, “A person who is serious about their recovery will always be able to tell you their ‘date.’  Mine is June 28, 2016. That’s when I got arrested again. That’s what led to me talking to Mr. Merrell. That’s where it all started.”

Kimbro gets excited when she talks about the date she was arrested, because, “That’s also my clean date!” To Kimbro, that’s when her life started anew.

Kimbro remained in jail from June 2016 until September when she was admitted into Crossover Ministry, a faith-based residential rehabilitation program in Opp.  Six months later, she graduated Crossover. She did so well as a client that the staff at Crossover asked her to remain there as a staff member.

“We saw something special in Jamie,” noted Crossover’s Executive Director, Red Coleman. “You could tell she loved Jesus, and she loved people, and she wanted them to find the same joy in Jesus and in sobriety that she had found. Ever since then, Jamie has been helping people find those things. She is making a huge impact in people’s lives.”

“There were some big hurdles to clear even after I got clean,” Kimbro said.

When asked what got her through the rigors of Drug Court, Kimbro simply stated, “Sabrina.”

“She never gave up on me,” Kimbro said. “The grace she showed me let me know that she legitimately cared about me. She always picked me up and pushed me. Mr. Merrell got me in the race and Sabrina pushed me to finish it. She wouldn’t let me quit, either. Fact is, everyone at Drug Court genuinely cared about me, and not just me, but every single client in the program. The entire Drug Court staff bands together for one common goal: for the clients to get sober and live a healthy and productive life.”

“ She overcame what she once thought was impossible, and we are so very proud of all the things she has accomplished,” Cobb said. “She is a new woman, and she will do great things to help others get where she is at. More than that, though, she is a new mom, a new daughter, a new grandmother…restored to what she was intended to be all along.  She now has the opportunity to lead and guide and nurture her family and friends in the way she always desired to, but never thought she could.  On top of that, she can now help restore other women who are where she once was.”

The Andalusia Bulldogs laid the hammer down on the Montevallo Bulldogs to pick up a 28-8 win in the opening... read more