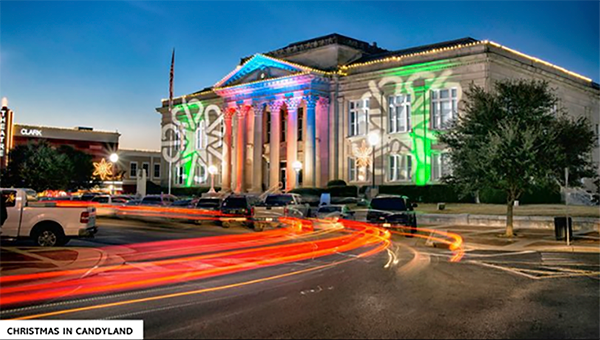 This is the photo Country Living used with its listing of Andalusia as a top destination.

Country Living ranks Andalusia, Candyland among top 30 places for Christmas in the nation

Country Living magazine has named Andalusia one of the 30 best small towns in the United States for Christmas, and local officials couldn’t be happier.

“Country Living is a national magazine,” she said. “Last year, Southern Living named us one of the best Christmas events in the South. To be recognized as a top Christmas town in the United States takes it a step further.”

“As you can imagine, we are just thrilled and tickled to death,” he said. “This is not the first time we’ve been recognized. Southern Living named us one of the best last year.

“This peaks well for Chrissie and Maggie (Jones), and the Chamber board,” he said. “A great deal of credit goes to our hard-working city employees who help Chrissie and Maggie run that. It speaks highly of our city in general that people enjoy coming down here. And it just keeps getting bigger and better.”

This year, a maze has been added, and there is a Christmas in Candyland app that helps users capture the magic of Candyland and take it home with them.

“First, my grandchildren being here,” he said. “And driving the new train engine.”

Last week, the council agreed to upgrade the train engine that pulls the Candyland Express.

In Country Living’s description and slide show, it wrote, “It doesn’t get too cold in Andalusia, but that doesn’t stop the town turning into a winter wonderland. Every weekend in December, residents flock to Candyland, a kid-friendly event where children of all ages can ice skate, visit the different holiday cottages, and meet Santa. The best part? Admission is free!”

So who are the other 29 small towns that earned the ranking?