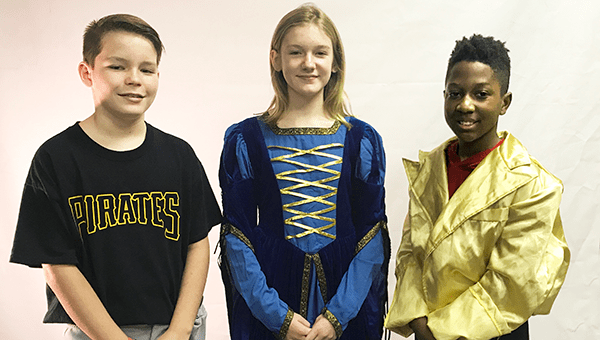 On Friday morning, more than 140 students will make history come alive when they parade in character costume from city hall to the Court Square, where they will present information about the characters they’ve spent weeks studying.

On Tuesday, a number of students did radio and newspaper interviews about the characters they’ll appear as on Friday.

“He was the president of South Africa,” Love said. “His father, who was a tribal chief died when he was young.”

Mandella led many strikes,  he said, and went to prison for 27 years.

“He wanted justice for everyone, especially black people.”

Love said he likes his character “because he gave speeches in which he would say what he believes in. He was a good guy overall.”

Clemente was a baseball hall of famer who amassed 3,000 career home runs, playing primarily for the Pirates and Dodgers.

“He died in a plane crash,” Marshall said, adding that the baseball star was going from his native Puerto Rico to Nicaragua to help with earthquake relief.

“He was a very nice person who helped people even though he didn’t know them,” Marshall said.

Maecy Starnes will portray Isabella of Castile, who was born in 1451.

“She took the throne in 1479 when she was 28 years old,” Starnes said. “She had one brother who took her father’s place. He died, and she became queen.

“She funded Columbus’ exploration, and lowered crime rates in Spain.”

Castile also was the first woman whose face appeared on a coin.

“She was very confident,” Starnes said. “When she was younger, she was really shy, but grew up to not be shy.”

McQuay, who teaches history, said the project is technically an English assignment, but other teachers have helped.

“I’ve been impressed with how they went beyond the book they were assigned and did other research,” he said. “They took ownership of the project.”

“Because at a young age, she ended up in a concentration camp,” she said.

“Because he was a good athlete, and he even impressed Hitler.”

That was no small feat for a person of color, as Hitler believed in the supremacy of the white race.

Marshall said he like learning about Nelson Mandella and Martin Luther King.

“They were brave to show other people not as many rights as them,” he said.

The Living History Parade begins at 8:45 a.m. Friday at city hall and continues to the court square. Students will give presentations from 9 until 9:45 a.m.