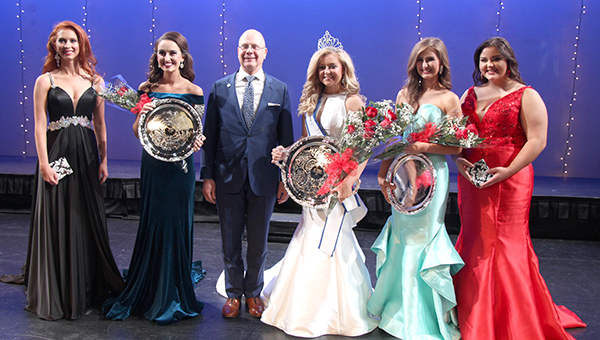 Ms. LBWCC 2019 is Hannah Bulger, daughter of Shannon and Stephanie Bulger of Andalusia.

She is a freshmen majoring in nursing. During the talent competition, she performed a double baton routine to “What a Girl Wants.”

She participates in the Andalusia Chamber of Commerce Candyland each year, volunteers with Meredith’s Miracles Cookies with Characters event, and volunteers at the Enterprise Nursing Home. Her career goal is to become a nurse anesthetist.

First runner-up is Madison Griffin, daughter of Joey and Lori Griffin of Andalusia. She is a freshman pursuing an associate in science degree. Her talent was a piano performance of “I Could Sing Your Love Forever.”

She serves as an Ambassador at LBWCC in Andalusia and is an active member of Hopewell Baptist Church. She plans to transfer to Auburn University to pursue a degree in pharmacy.

Second runner-up is Kaitlyn Beverly, daughter of Debbie and Danny Beverly of Georgiana. She was also named winner of the interview portion of competition and tied for Ms. Congeniality, selected by the contestants.

She is a sophomore majoring in communication disorders. She performed a monologue in the talent competition titled “Just Me,” encouraging people to be the best version of themselves.

She is president of the LBWCC Student Government Association and a member of Mu Alpha Theta mathematics honor society. She is active in her community as church youth leader, volunteering with The Big Event community service project, and participating in a mission trip to Puerto Rico. She plans to transfer to Auburn University at Montgomery after earning an associate in science degree.

Misty Shaulis of Luverne also was named Ms. Congeniality by her peers. She is a freshman majoring in occupational therapy. For her talent portion of competition, she performed a monologue titled “First Time for Everything.”

She is involved on campus with Student Support Services and volunteers in her community with the rodeo, her church and its school. She is currently pursuing an associate degree and plans to transfer to a four-year university.

Organizers of the South Alabama Airshow are preparing to deal with a crowd of more than 15,000 people at the... read more