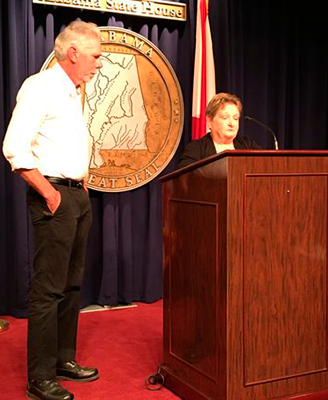 Shelia Faulkner, right, speaks at a press conference organized by Sen. Jimmy Holley on Monday to raise awareness of the dangers of drowsy driving. Courtesy photo

Twelve years after the tragic death of her son, Sheila Faulkner is still hard at work with an awareness campaign on the hazards of drowsy driving.

Faulkner was a guest speaker at the Third Annual Drowsy Driving Awareness Day at the state capitol on Monday.

Faulkner lost her 28-year-old son, Wendall Williams, in November 2006. Williams was a passenger in the car, and by accounts, riding with a man who had been awake 22 to 30 hours before he fell asleep at the wheel that morning.

The driver was not charged, nor given any traffic citations.

She began her speech by reading the same  Edgar Guest poem that was read at her son’s funeral.

Faulkner also read a Mother’s Day letter from her son that he gave her a year before the accident.

“It has been hard on us for the past 12 years,” Faulkner said. “But we are making headway and getting a lot more information on drowsy driving.”

Faulkner said that she will not give up until something is done about drowsy driving.

“The man who killed him only got a misdemeanor,” Faulkner said. “He didn’t even have insurance. I want to fix it so it’s a felony if you kill somebody while drowsy driving. The people that drive drowsy need to take responsibility for their actions.”

Even though the accident was tragic, Faulkner still feels that being an advocate against drowsy driving is a blessing.

“I knew that it shouldn’t have happened,” Faulkner said. “But I knew him for 28 years. Being able to speak about what happened and be an advocate against drowsy driving is such a blessing.”

Faulkner is still pushing to get new legislation passed making it illegal to drive when drowsy, but she does say that there has been improvement over the past 12 years.

“I am going to go back out to the capitol when the session starts again,” Faulkner said. “Hopefully we can rewrite the bill and fix it to make drivers be responsible for their actions. There has been a lot of improvement since the accident though. I have met with Gov. Kay Ivey and former Gov. Robert Bentley and they both signed a resolution stating that Nov. 19, is Drowsy Driving Awareness Day. I have also talked with several reporters about how they are adding drowsy driving to the beginner’s driver’s education handbooks. I am just trying to save lives now. I’m trying to make something good come out of something bad.”

A press release issued by Sen. Jimmy Holley said that by having a day set aside for Drowsy Driving Awareness can help get this message out.

“Each year on November 19th we remember one of my constituents, Wendall G. Williams, who lost his life due to a drowsy driving accident,” Holley said. “Wendall was from Andalusia and tragically passed away twelve years ago. His parents, Shelia and Chuck Faulkner, have diligently met with representatives, senators, and law enforcement officials to inform them of the hazards of drowsy driving. Thanks to the tireless efforts of the Faulkners, we now are on the road to help prevent other senseless deaths from happening.”

Alabama State Troopers Brock Gwaltway and Jeremy Burkett spoke, as did Teonna Wilson from VOCAL (Victims of Crime and Leniency).