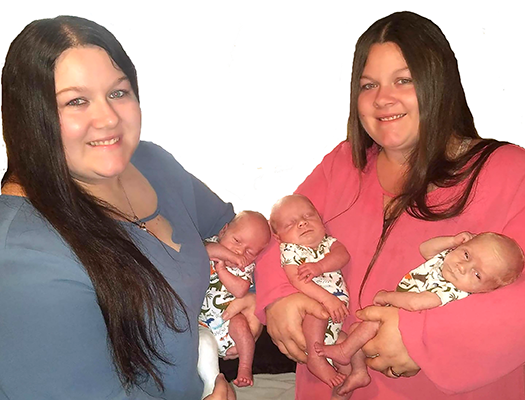 For four years, Jessica and Brandon Chance prayed for a second child. Then, in the space of a year, that prayer was answered four times over.

“We always wanted multiple children,” Jessica Chance said. “We started to try for a second child when our son started preschool and was 4 years old. We tried for four years and were able to conceive my son, Brennon, who was born Nov. 15, 2017.”

The Chances were gong to wait and decided if they wanted more children. But God had other plans. When Brennon was 10 weeks old, Chance learned she was carrying triplets.

“He blessed us with three more boys to make up for the years we were praying for Brennon,” she said. “I am now a boy mom to five boys, four of whom are under 2.”

Asked how she felt when she learned she was carrying multiples, she said her immediate thought was “Wow, God must have a lot of trust in me. He won’t give me anything I can’t handle.”

And then, she got busy.

“We started gathering items and stockpiling clothes between my house and my mother’s. Throughout the whole ordeal, I have honestly not become overwhelmed. The only way I can explain it, is peace from God. Jesus tells us when we believe in Him we need not worry, He will provide. God is in control. I believe His words with my whole heart and give credit to that as to why I have maintained a calm spirit.”

Chance was admitted to the hospital in Mobile at 29 weeks, five weeks before delivery. The triplets include a set of twins, who shared the same placenta, but not the same sacs, and one was taking more blood flow than the other. The babies were born at 34 weeks, which is considered full-term for triplets.

“All together, I stayed five and a half weeks in the hospital, and three weeks a Ronald McDonald House before all three were released from the NICU,” she said.

They were welcomed by their big brothers, Breighton, 8, and Brennon, 1.

Baby Barrett was released from the NICU at 10 days; Brantley was released at 21 days; and Branson was ready to come home at 24 days. On Fri., Nov. 9, all three babies were home in Red Level. The only medical issue among the three is that Brantley has a clubfoot – the result of being crowded in the womb – and it is being treated with a brace.

Chance was the manager of Subway on the bypass for five and half years, a job she took over when her twin sister, Heather Crain, left it. Chance said she was the salutatorian at Red Level in 2007, and said she has always worked full time to support her family, including jobs at Aaron’s Furniture and Vinny’s convenience stores.

Although Chance is a twin, she said she’d never given thought to the possibility of being mom to multiples.

“The uniqueness of my story is that we did not use any fertility drugs, so the chances are very slim to spontaneously conceive triplets. I believe they told us like 1 in 8,000 cases.”

She was about to go back to work after giving birth to Brennon when she learned of her high-risk pregnancy with triplets. Work was not an option. Now, just being mom is a full-time job. She estimates she changes 40 diapers a day, and for the four babies, makes about 45 bottles a day. And she said she has a tremendous support system.

“My church, Buck Creek Baptist, has been a huge support,” she said. “From personal members donations, to diaper donations and so many prayers.”

She also has relied upon family members for help, including her parents, Cathy Crain and Brian Crain, and in-laws, Carolyn King, Brian Chance and Kay Brannon. She also has had help from her twin sister, Heather Cain, a younger sister and old brother.

“My husband’s family has also helped tremendously with the other kids and any need that arises,” she said. “My siblings families have helped me financially and physically through this whole process. I have been blessed with a close family.”

Friends and former co-workers also have contributed to the family’s well-being.

Brandon Chance is currently in Crossover Ministry dealing with drug addiction, and will graduate in February.

“This is another reason things have been hard financially because he is not able to work and provide for us currently,” she said. “He developed an addiction a few years ago around the time I became pregnant with Brennon. He has since then sought help and has been sober for the past year.”

A gofundme account was established to help the family, and it can be found at www.gofundme.com/chancetriplets.

Drowsy driving awareness, prevention is her goal Twelve years after the tragic death of her son, Sheila Faulkner is still... read more