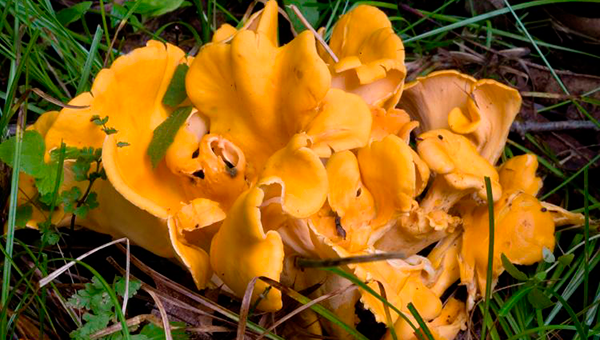 Red Level native Terry Ledbetter has foraged mushrooms for eight years, and has collected several hundreds of pounds with the hopes of selling them to make a little extra cash. But with strict regulations by the federal government, he hasn’t been able to do so.

Now, there is hope on the horizon after the Bureau of Environmental Sciences had a meeting to create an avenue for foragers like Ledbetter to sell their fungi to retail stores such as Wal-Mart or other big grocery stores.

Ledbetter said that he had never collected mushrooms before his trip to the Smokeys.

“I bought one of their good books on mushrooms from the ranger station and immediately started finding edible mushrooms,” Ledbetter said. “I collected a few, not knowing what they were exactly. Later I looked them up, found that they were Chicken of the Woods and cauliflower mushroom, tried them both and I liked them.”

When Ledbetter returned home, he thought that there would be no mushrooms in the Covington County area worth foraging, but now he has a freezer full.

“I never heard of forageable mushrooms growing in the area, so I didn’t think we would have any,” Ledbetter said. “It took a while because it wasn’t the right season for the mushrooms to grow, but then my wife and I started finding chantrelle mushrooms, reishi mushrooms and lion’s mane mushrooms in the fall.”

Once Ledbetter ended up with a freezer full of mushrooms, he started wondering why he couldn’t sell his produce.

“I learned that a pound of these mushrooms sells for about $20 to $30,” Ledbetter said.  “So when I ended up with about 80 to 100 pounds of them, I started wondering why we couldn’t sell them.”

Ledbetter then started researching the topic.

“The first thing that came up when I researched it was to go to your local health department,” Ledbetter said. “So when I reached out to them it took them about a week to find the information, and they then told me that any wild mushrooms have to go through an FDA approved, certified wild mushroom dealer.”

Ledbetter said that there are people in north Alabama that are making thousands of dollars per month when they’re operating outside of the law, but he just wants to do it the right way and hopes that it will be a good thing for the whole mushroom community.

“I went to the health department again and asked where these people were getting their permits and they told me that there were no permits in the state of Alabama,” Ledbetter said. “That every mushroom that they have sold has been against the rules.”

Ledbetter contacted Rep. Mike Jones to see if a permit to sell foraged mushrooms in Alabama could be developed. After meeting with Jones, Ledbetter called several of the other mushroom sellers that were not following the rules to try and get them on board with the bill.

“I told them that what they were doing might not be exactly according to the rules,” Ledbetter said. “But that I have a permitting process started that they may want to look into. I told them that they should contact their local representatives to see if they could help with it, but meanwhile they should hold back on what they are doing while this is coming to light.”

Since Ledbetter has raised the question about permits on the fungi, he said that he has been stepping on the toes of the other sellers, including the biggest name in Alabama for mushroom foraging, Tim Pfitzer.

“Once it came out that I was trying to get this legislation rolling, Tim Pfitzer contacted me wanting to be apart of it,” Ledbetter said. “He wanted to know who I was in contact with and that this shouldn’t be done in Alabama without him. He said that he wanted to be in contact with anyone making decisions about this project, and that he thinks the permits should cost $3,500 a year, when they only cost $200 in Georgia. Right then I knew he wanted to be the paterfamilias of mushrooms in Alabama.”

Ledbetter’s main goal is to be able to sell his foraged mushrooms.

“That’s all I want, is to be able to sell these mushrooms and make a little extra cash,” Ledbetter said. “Right now I eat my mushrooms, make tea, give some to friends and family, in hopes that they will get into it later. I read some articles about a man who was selling mushrooms and making a great living for his family and that is what I want.”

According to the Bureau of Environmental Science’s Public Health Supervisor Phyllis Finn, there was a meeting yesterday about creating an avenue for mushroom marketers such as Ledbetter to start selling their wild mushrooms to retail stores.

“There has been a lot of confusion lately about this situation,” Finn said. “You are not allowed to sell wild mushrooms to a food establishment unless they are from an FDA approved source. There are several rules and regulations in Alabama because we have never had such an interest in selling mushrooms until the past three years.”

Finn said that the only reason there are such strict regulations on the selling of wild mushrooms is because they want everyone to be safe.

“You expect the food you buy to be safe when you eat it,” Finn said. “So when you go to Wal-Mart everything is from an approved source. We had a meeting yesterday and we are getting a committee together to start getting things going for these foragers.”