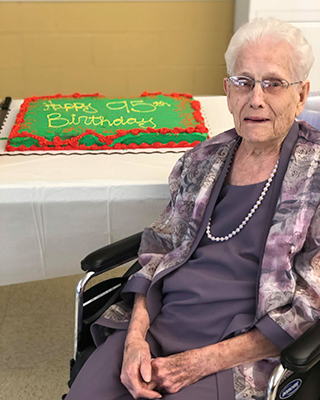 Ora Thompkins recently celebrated her 95th birthday with a gathering of family and friends at Andalusia Manor. Courtesy photo

When Ora Thompkins scrolls way back in her memories, she remembers a Christmas season when she had begun to be suspicious about Santa Claus.

When no one was looking, she went into the bedroom reserved for company.

“I was trying to find where Santa Claus’s hiding place was,” she said. “I hated dolls. Anyhow, I went in there and I found a big old doll. It was bigger than a baby doll would have been. It looked like a real baby.

“I couldn’t figure out nothing else except it was for me,” she recalled.

She thinks it was the year she was 7, and the family cut a holly for a Christmas tree.

“We had our Christmas Santa Claus on Christmas Eve, and that was when I got my doll,” she said. “I cannot remember what I said about my doll. But I was very dissatisfied.”

Another year, her gift was a climbing monkey, which was infinitely better than a doll, she said.

“Anything would have been better than that doll.”

Thompkins grew up in McKenzie, and graduated from high school there in 1943. There were 10 people – nine of whom were girls – in her graduating class. Most of the boys had gone off to war, she recalled. Her father, Elder C.G. Myers, was a Primitive Baptist minister, but also farmed, did carpentry work, and at one time worked at Opp Micholas Mills. One of her jobs on the farm was milking the cow.

“I would go the cowpen at 7 and start milking the cow,’ she said. “It took me about 10 minutes.

“We were lucky. Our daddy had found a man in McKenzie who would go to Atlanta and other areas and buy used furniture. He found us a refrigerator you could put ice in. They delivered it 50 pounds at the time.”

Her parents never owned a vehicle.

“We went a lot of places with the horse and wagon. Or a mule in wagon,” she recalled. “That was our form of traveling.”

Sometimes, someone would pick her father up; others, he would walk to his destination.

“There was always meat in the smokehouse,” she said. “Daddy would go cut a hunk of meat big enough for supper.”

After her high school graduation, she moved to Mobile, where she lived with her brother and sister-in-law, and got a job at Brookley Field.

“My job was issuing tools out for the people in the shop,” she said.

She remembers that people used very little light at night, and then only behind darkened shades. There was a war on, and officials didn’t want potential bombers to be able to identify the coastal city by night lights.

“We tried to talk about the war the least we could,” she recalled. “None of my immediate family had to go.”

When her family decided to move, she went home, too.

“I could have boarded, I guess, but I came back and went to work in the probate office (in Covington County),” she said.

All of the work was handwritten then, from writing deeds to issuing hunting and fishing licenses.

It was while working in the courthouse that she met the man who would become her husband, John Morgan (Johnny) Thompkins. She left the courthouse and worked with him in businesses that included a service station, garage and auto parts store, and they reared five children – Shelia Thompkins Williams, Ronnie Thompkins, Sandra Thompkins James, Wesley Thompkins and Brenda Thompkins Fuqua. She also lost two sets of twins.

Thompkins, who is now a resident of Andalusia Manor, recently celebrated her 95th birthday with a party there given by her four surviving children. The more than 60 people in attendance included family members from as far away as Young Harris, Ga., and Ocean Springs, Mississippi. She described it as a “wonderful day.”

The Pilot Club of Andalusia’s Annual Pancake and Sausage Breakfast is right around the corner, and this year, Organizer Melissa... read more