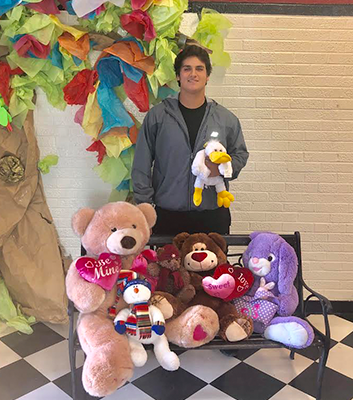 R.J. Carrasco is shown with some of the toys he has collected.

Andalusia High School senior R.J. Carrasco is focusing on helping children affected by Hurricane Michael by organizing a toy drive for his Be the Change project.

Be the Change is a senior English assignment that requires students to compete a project in conjunction with a research paper.

Carrasco knew that he wanted to do his project to benefit the people of Panama City, but he didn’t know exactly how.

“In the beginning, Logan Adams and I were going to go down to Panama City, chop wood and give it to the people so they wouldn’t have to buy fire wood,” Carrasco said. “But that didn’t work out. So we started thinking about focusing on just the kids that were affected by the hurricane.”

Carrasco said that not many people think about what all the kids go through that were affected by the hurricane.

“Most people are focusing on what the parents have to do to make sure everything is O.K.,” Carrasco said. “That leaves the kids there with no security or comfort. They’ve lost all of their possessions and everything as well, so I started thinking about if that happened to me when I was younger, I would be pretty lost.”

Carrasco said that his main goal with the project is to provide the kids with a good Christmas despite their traumatic experiences.

“We just want to make sure that they have a Christmas this year,” Carrasco said. “They probably won’t have a good Christmas, but we can help out with that.”

He thinks that being able to give these kids toys will give them a sense of security that they don’t have right now.

“Now since they have something to be happy about, hopefully it will help them through this time,” Carrasco said. “Not only will it help the children, but it will help the parents as well. I know that they are having a rough time, so if we give the kids presents, the kids will be happy, which in turn will make the parents happy.”

Every Be the Change project had to be accompanied by a research paper that was related to the service project. Carrasco’s topic was posttraumatic stress disorder.

“I did my research paper on PTSD,” Carrasco said. “Specifically on how it comes into play with natural disasters and how it affects kids and families.”

Carrasco said that he hopes delivering toys to these kids will help alleviate some of their PTSD.

Carrasco has a Facebook fundraiser already started with the goal at $1,000, he hopes to use that money and go to Wal-Mart to purchase toys for the children.

“Wal-Mart has been great, they already donated a $50 card for us to buy toys,” Carrasco said. “We are hoping to have a truck full of toys to take down there for the kids.”

Alan Lindsey with Andalusia Ford has teamed up with Carrasco to help him in his fundraising endeavors.

“R.J. is an awesome kid,” Lindsey said. “He has a great plan and we are committed to help him hit his goal and to be successful.”

Carrasco said that Lindsey has been a major help.

“He has been great,” Carrasco said. “Once he heard about it, he has been texting people and getting in touch with a lady from Florida to find kids to donate to. I can’t thank him enough.”

The Toybox Toy Drive will be Sat., Dec. 1, at Andalusia Ford from 10 a.m., until 2 p.m. Carrasco will be accepting monetary donations and new or gently used toys.

For people who cannot make it to the toy drive on Sat., donations can be taken to the Andalusia High School nurse’s office.