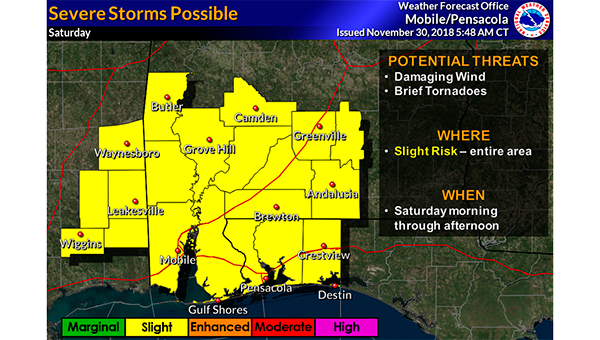 “Numerous to widespread showers and thunderstorms will develop as a strong upper level disturbance over the western Gulf of Mexico lifts northeast across the region,” Harris said. “A few storms may become strong to severe over the entire forecast area, along with heavy rainfall and possible localized flooding.”

Harris said that forecasters expected storms to move in after midnight on Friday and continue until Saturday afternoon.

Harris said that the primary threats will be strong to severe locally, with damaging wind gusts in the 40 to 60 mile per hour range and perhaps a brief tornado.

“ Heavy rainfall and localized flooding will be possible mainly east of I-65 where rainfall totals between 2 and 4 inches is likely,” Harris said. “With locally higher amounts possible, resulting in some nuisance flooding.”

The Andalusia Area Chamber of Commerce staged an hour-long parade featuring hundreds of entrants last night to kick off the... read more