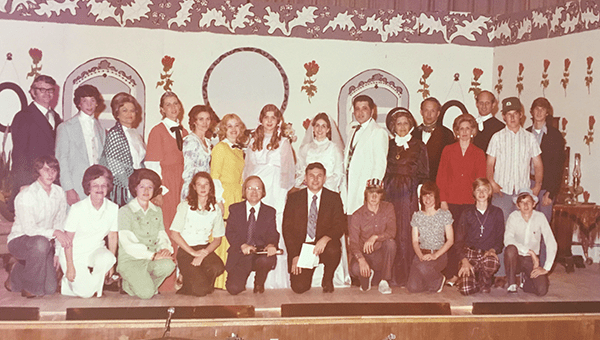 The cast and crew of the 1974 production of ‘Little Women.’

“Little Women” is one of the best loved books of all time and one of the most cherished books in American literature. As we enter the Christmas season, various novels and short stories come to mind including  this story of four sisters, Meg, Josephine, Beth, and Amy, and their mother “Marmee” set in the March family home in New England.

The story begins as the girls are conversing a few days before Christmas about the gifts they are hoping to give and receive in their impoverished situation with their father away from home serving as a chaplain in the American Civil War.

This family drama that validates virtue over wealth depicts what was expected of women at the time including domestic duty and work but also a quest for true love.

This adored classic based loosely on the life of American author Louisa May Alcott has been adapted for movies, tv series, opera, and even a Broadway musical. A new rendition is set to be released in 2019.

This year 2018 is the 150th anniversary of the publication date of the first volume of “Little Women (1868-2018).” Avidly read for generations, this 19th century novel contains life lessons for all, especially boys, as it follows the adventures of the March family.

March 17, 1974 – The Andalusia Star-News – ‘“Little Women,’ a musical comedy based on Louisa May Alcott’s beloved classic is scheduled for its ‘world premiere’ March 23 in the Andalusia High School auditorium at 8 p. m. The musical production containing some two hours of original lyrics and music is sponsored by the Andalusia Bicentennial Committee as its first fund-raising project.”

“Written by local AHS English instructors, Joseph C. Wingard and S. Daniel Shehan, ‘Little Women’ contains some 22 original songs with lyrics by Wingard and music by O’Sheehan. These musical numbers include marches, hymns, patriotic numbers, love songs, Christmas music, waltzes, and picnic music. The two members of the AHS faculty have worked on the play for six years and some of its music for eight years. The drama has been in production since January in the high school auditorium courtesy of Supt. Oscar M. Zeanah and Principal Dr. Ed Richardson. According to Wingard, the cast members have put at least 200 hours of work apiece in the last three months in preparation for the operetta. He added that literally thousands of hours of work have been contributed all together.”

Remember When – Not only did the production get presented in Andalusia on March 24 and 26, 1974 but also at Troy State University in October 1974, at Enterprise High School in November 1974, highlights and excerpts televised on WSFA-TV in February 1975, and an anniversary presentation back by popular demand in March 1975. It was said in all of the newspaper accounts, editorials, and tributes that “talents were unveiled that many Andalusians never knew existed!”

So many locals were a part of this event. The four “Little Women” were Lenora Johnson (Jo), Louise Merrill (Amy), Angie Bradley (Beth), and Anne Mount (Meg). The unforgettable Aunt March was played by Carolyn Rankin. Marmee, the mother, was played by Grieg Blasbichler and Jeanice Kirkland. Set designer was Margo Russell Bell. Prompter was Katie Lynn Powell. Pianists were Mary Clyde Merrill and Ann Martin. Tuba and Drums were played by Greg White and Greg McCord. An art display in the lobby was under the direction of Mrs. John Scherf III and Mrs. Dessie Manning. Many others including additional cast members were listed in the program along with those who assisted with costumes, ticket sales, publicity, make-up, stage hands, custodian, lighting, sound, and props.

Property Master was Judy Buck who recently received an unexpected large package in the mail from Dan Shehan who forwarded and donated the scrapbook, the music, the script, and other memorabilia to the Three Notch Museum.

In his note to Judy Buck, Mr. Shehan wrote, “It is with great reluctance and sadness that I am parting with the items connected with the production of ‘Little Women’ 44 years ago. I know that I will not always be here, and they need to be preserved somehow. If any group might wish to perform it again, I hereby give my permission. “

Said Wingard of the production in pre-performance advertising, “I’ve been told that we are going to play for a capacity crowd. I hope so. The cast, pianists, and others have given their precious time to this, and I’m counting on Andalusians to support the first big effort of their Bicentennial Committee. I have seen the idea grow from a thought to something beyond my fondest dreams. I am deeply indebted to the talent of my and friend and co-worker S. Daniel Shehan, whose music to me is as good as anything any living composer has written. To me, his melodies are the finest in the world today, and Andalusia is fortunate to have such a musician among its citizenry. Without his wonderful ability, we could never have had this musical.”

“He and I are further indebted to Mrs. Louise Barrow for her transcription of numbers of sheet music for the play. The cast is a dream. I think I have only heard three sentences of melancholy in the months of practice. The rest has been optimism, sacrifice, enthusiasm, cooperation, and dedication. I know that everything we are doing is on an amateur level, but I think my cast and music are professional. I am deeply grateful to them and all who have selflessly helped.”

What a wonderful gift of these keepsakes Mr. Shehan sent to Andalusia. What a loss to our town is the death of Mr. Wingard – English teacher, writer, poet, actor, singer, creator, and mentor. Mr. Shehan who moved to Savannah a few years ago is sorely missed – musically talented song writer, pianist and organist extraordinaire; historic preservationist and visionary; lover of beautification; teacher with God-given ability; a proud American with a deep appreciation for English tradition. All attributes of his when added up result in a tremendous loss of a citizen in our community when he moved away.

I Remember When each December the annual Christmas Carol Sing hosted by Mr. Wingard and Mr. Shehan was held first at the Shehan home in Meadowbrook, later at the Baptist, Methodist, and Presbyterian churches. The two-to-three hour program followed a set format – the first half mainly secular music; the second half was religious music with refreshments between. Vocal and instrumental soloists, ensembles, and other musician friends performed. This event started in 1970 was staged for 25 years. Over the years the duo wrote many Christmas songs for the Sing.  “The Mistletoe Song” is one of their all-time favorites. Another title or two includes “Wrap Me Up in Christmas,” “I’m Getting All Dressed Up For Christmas,” and “I Love Christmas.” These songs were published in 2013 – “Christmas Songs.”

Mr. Wingard was always donned in a Santa Claus outfit for the first half and greeted guests at the door. The second half of the Sing, he came out in a tuxedo with a boutonniere.  That was the outfit he was laid to rest in a year ago after his death in December 2017. At the conclusion of every Christmas Sing, he spoke these words, “As Tiny Tim would say, God bless us every one!”